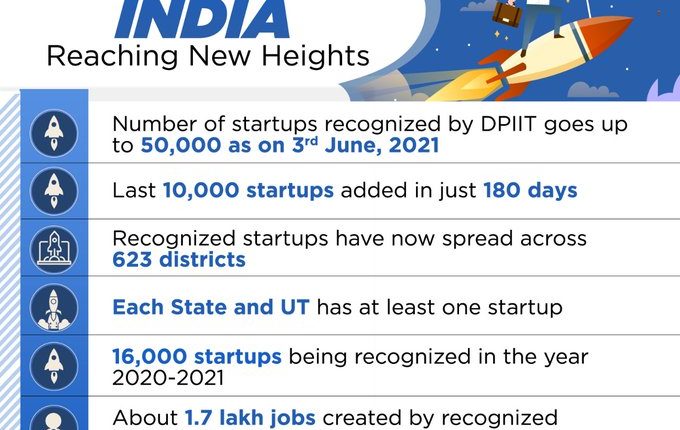 New Delhi: Startup India is a flagship initiative of the Government of India launched by the Prime Minister Shri Narendra Modi on 16 January, 2016. The initiative is intended to catalyse startup culture and build a strong and inclusive ecosystem for innovation and entrepreneurship in India. Department for Promotion of Industry and Internal Trade (DPIIT) acts as the nodal Department for the Startup initiative. As on June 3, 2021, 50,000 startups across have been recognized as startups by DPIIT, of which 19,896 have been recognized since April 1, 2020.

With the launch of the Startup India initiative, recognized startups have now spread across 623 districts. Each State and UT has at least one startup. 30 States and UTs have announced specific Startup Policies to support startups. Maharashtra, Karnataka, Delhi, Uttar Pradesh and Gujarat have the greatest number of startups.

Entrepreneurs now have options to avail benefits across a range of laws, regulations, fiscal and infrastructural support, leading to a surge in startup ecosystem growth.

Startup India at DPIIT has played a pivotal role in strengthening the key pillars identified for our startup economy. Funding opportunities to startups have been enhanced through the Fund of Funds Scheme with an overlay of INR 10,000 crore and the recently launched Startup India Seed Fund Scheme (SISFS) with an outlay of INR 945 crores.

Multiple programs conceived and implemented by DPIIT  –National Startup Awards, State Ranking Framework, Global VC Summit, Prarambh: Startup India International Summit – have provided the ecosystem an opportunity to engage with multiple partners, get recognized for their contribution and showcase the work that is being done.

DPIIT will continue to engage with multiple stakeholders to address the growth opportunities and challenges in the ecosystem, helping the Indian startup ecosystem reach greater heights.