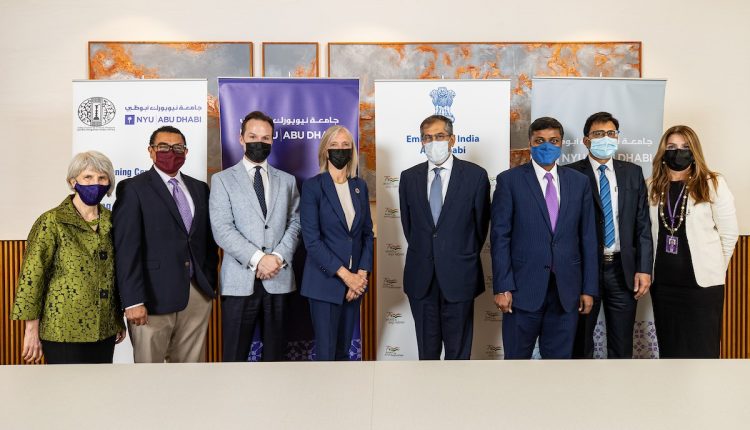 Collaboration marks first of its kind in the Gulf, and forms part of outreach efforts to establish stronger academic and cultural ties

Abu Dhabi: NYU Abu Dhabi (NYUAD) and the Indian Council for Cultural Relations (ICCR) have signed a historic Agreement to establish a Visiting Professorship in Social Science at NYU Abu Dhabi. Through the partnership, NYUAD and ICCR will collaboratively appoint faculty members from Indian universities to the ICCR Visiting Professorship. The visiting faculty member will spend between 6 to 10 months undertaking research and teaching in the Division of Social Sciences at NYU Abu Dhabi. The agreement aims to promote broader engagement with India, a country that is strategically significant to the UAE. Indians represent the largest expatriate population in the UAE and India is one of the UAE’s largest trade partners.

Ambassador Kapoor said: “I am very pleased to sign this Agreement on behalf of ICCR. The Agreement, the first such one signed between the ICCR and a Foreign University in the GCC, is special also because it is being signed as India is celebrating 75 years of its Independence as ‘Azadi Ka Amrit Mahotsav’ and the UAE is celebrating its golden jubilee as ‘The Year of 50th’. The strength of NYU Abu Dhabi’s research in social science will provide a useful platform for top academicians from India to present students with a more nuanced understanding of the country, and thereby contribute to strengthening India-UAE relations. We are eager to make the agreement functional as early as possible.”

Director-General of the Indian Council of Cultural Relations (ICCR) Dinesh Patnaik said: “I am delighted that a Visiting Professorship in Social Science is being established at NYU Abu Dhabi to promote academic linkages and strengthen the age-old cultural ties between India and UAE. I am sure this professorship will help students develop a rich cross-cultural understanding and learn about the history, geography, philosophy, languages, art & heritage of each other’s countries. As part of its mandate, ICCR is committed to promote learning and sharing of knowledge between the two nations and the establishment of this Visiting Professorship is a further step in this direction.”

University of Exeter: Talent in rural areas of Cornwall…

University of Exeter: US early Cold War hostility towards…

“We are delighted to welcome eminent scholars from India’s leading universities to NYUAD,” said NYUAD Vice Chancellor Mariët Westermann. “NYUAD already enjoys close educational and cultural ties with India, and we are delighted to enhance the relationship through this visiting professorship. At NYUAD, we are dedicated to upholding the ideals of tolerance and respect, and this includes driving deeper understanding of other cultures and traditions. The relationships between the UAE and India are profound, and as a University in and of Abu Dhabi we look forward to playing our part to enhance academic exchange between the countries. We look forward to a fruitful collaboration and to welcoming our visiting professors from India to our highly supportive and enriching academic environment.”

“The signing of the agreement represents a significant step in our efforts to further bolster our engagement with India,” said NYUAD Provost, Arlie Petters. “Our partnership with ICCR is based on our shared drive to foster stronger cultural and academic ties between our University and higher education institutions in India. We believe that hosting visiting scholars from Indian universities at NYUAD will build and strengthen important academic relationships and grow mutual understanding of each other’s culture and heritage.”

NYUAD Dean of Social Sciences, Paula England, said: “Cross cultural collaboration is key to building stronger relationships built on mutual respect and appreciation. We are deeply committed to finding a myriad of opportunities to further strengthen our relationships with important cultural institutions such as the ICCR. We look forward to expanding our perspectives and gaining new insights into contemporary India through this meaningful exchange program.”

The Indian Council for Cultural Relations (ICCR) was founded in 1950 by Maulana Abul Kalam Azad, a leader in India’s independence movement and independent India’s first Education Minister. It aims to foster cultural relations and strengthen mutual understanding between India and other countries.

YC-backed Edtech Platform Codingal Raises $1.2Mn in Seed Round, Aims to Sign Up 500k Students Within a Year

University of Exeter: Talent in rural areas of Cornwall “wasted” because of poor…

University of Exeter: US early Cold War hostility towards Chinese Communist Party due…