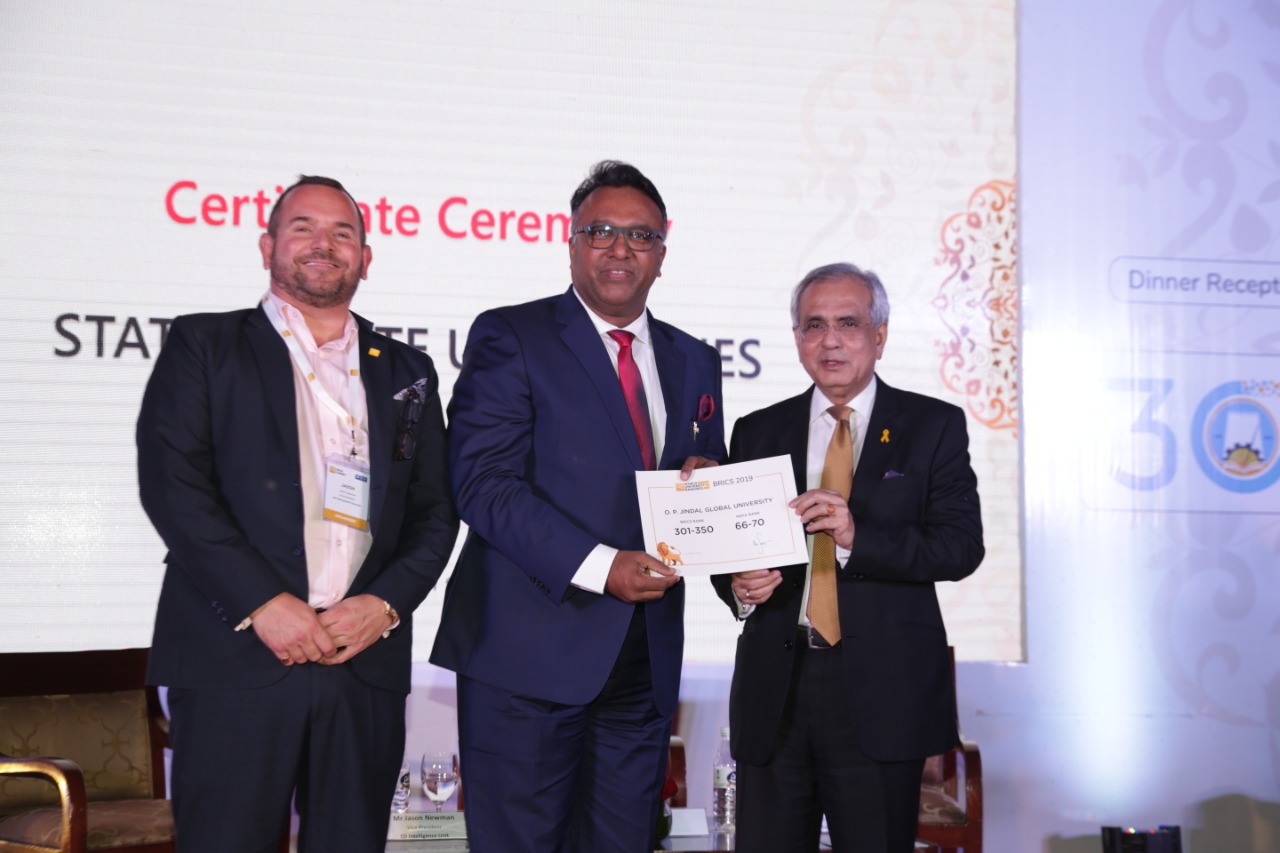 New Delhi: O.P. Jindal Global University (JGU) has been ranked in the 301-350 rank bracket of the QS BRICS University Rankings 2019, placing JGU among the top three per cent of the universities in the BRICS region that covers five countries namely Brazil, Russia, India, China and South Africa. JGU continues to be the youngest Indian University to feature in these rankings. It must be noted that JGU is one of only two private universities to be ranked out of the top 75 Indian Universities.

Founding Chancellor, JGU, Mr. Naveen Jindal on achieving this feat twice in a row said, “This global recognition of JGU in our short but inspirational journey of 9 years is truly remarkable and something that we can be genuinely proud of in every sense of the word. We are aware that this important recognition comes with greater responsibility to persist with our relentless efforts to advance the cause of excellence in Indian higher education and foster new imaginations for the future. I congratulate all the students, faculty, staff and other stakeholders, including the parents of our students, who have helped develop the University to fully realise our founding vision. As we look at the future, we need to think about how to fashion the growth and evolution of this institution”.

The University has been ranked 23 out of 403 institutions among BRICS countries in the category of international faculty. In the 2019 edition of QS BRICS Ranking, JGU’s standing has improved in two key ranking indicators of ‘papers per faculty’ and ‘academic reputation’

Founding Vice Chancellor, JGU Professor (Dr) C. Raj Kumar said, “JGU continues to be ranked amongst the top 350 universities in the BRICS region by QS. We had broken into these rankings for the first time in 2018. As a result of our hard work, commitment, and dedication to the cause of JGU’s vision and mission, JGU continues to be the youngest Indian University to feature in these rankings.

“What has allowed us to achieve this is our vision that was inspired by our founding Chancellor, Mr Naveen Jindal and his passionate commitment to philanthropy, institution building and nation building. This global recognition of JGU in barely 9 years is truly remarkable and something that we can be genuinely proud of in every sense of the word.”

Professor (Dr) Raj Kumar further added, “Universities have a larger role to play in the development of societies. They need to assume a leadership role that transcends national boundaries and are able to appreciate diversity and pluralism in all its forms and manifestations. Universities need to recognize that they have a special role in society.”

This year a total of 9,000 universities in the BRICS region were considered with as many as 31 new universities, and 14 new entrants in India ranking. QS Quacquarelli Symonds, a well-known global think tank and consulting body for higher education recently released its standalone rankings of India’s higher educational institutions.

Intangible cultural heritage: a wealth disseminated by UNESCO throughout Lebanon