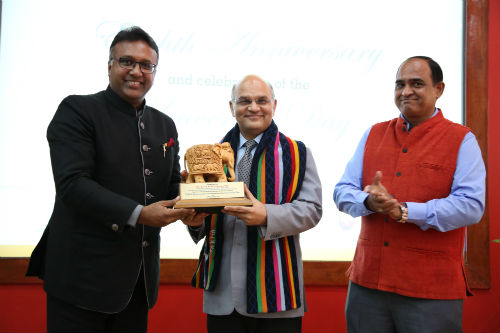 Mr. Kewal Kumar Sharma, IAS, Secretary, Department of Higher Education, Ministry of Human Resource Development Government of India speaking on the occasion said, “Private sector by itself, on sideline has been promoting absolutely outstanding institutions. The recent years has seen a surge in the private sector to promote institutions of excellence.”

He lauded the vision and initiative of Chancellor Mr. Naveen Jindal and Vice Chancellor, which have translated into reality, achieving great height in the short span of eight years. He said, “The initiative demonstrated by private sector needs to be commended by us as citizen as well by the government.”
Mr. Sharma also opined that as we encourage our students to do well in academics by “learning the tools of excellence”, we also have to ensure that Universities produce “global citizen, who is conscious of global requirement, peace, contributing to others and compassionate”

H. E. Ms. Mariela Cruz Alvarez, Ambassador of the Republic of Costa Rica congratulating the University, spoke about Costa Rica’s focus on education, health care and environment. Its noteworthy to mention that Costa Rica had decided to reallocate its resources on health, education and environment instead of military.

Quoting from Bhgwad Gita, Ms Alvarez said that we as teachers our role is to ignite students’ mind with larger sense of purpose and focus. World class Universities needs to transmit that passion and focus in interactions with young minds. “A person who is awake, not in denial and ready to give the very best, one who is proactive, motivated, vulnerable, feel other people’s suffering, open minded and sensitive”, she added.

Commenting on Costa Rica being a country without army, she said, “Being defenseless is our best defense. The decision we took in 1948 reaffirmed our commitment to the higher principles of life. We embarked on the task to unlock the full potential of our citizens”.

He also expressed a sense of pride at being awarded the number 1 rank at the recently held Swachhta rankings 2017, of all higher education institutions in India. O. P. Jindal Global University is recognised as the cleanest University/Higher Education Institution in India by the Government of India.

He further added that the university seeks to build bridges across nations, working with national, international, and governmental organisations, NGOs, and business organisations.

With 3500 students with a faculty-student ratio of 1:13 and offering 15 programmes, the university has been setting examples of excellence in higher education.

JGU’s robust global partnerships are designed to create opportunities for students and faculty members to expand their learning and research horizons. Since 2009, JGU established more than 195 collaborations with leading universities and institutions in more than 47 countries

The university also has 300 faculty members out of which 72% have degrees from leading global institutions across the world.

USIF and The Chopras Collaborate For A Bright Business Future