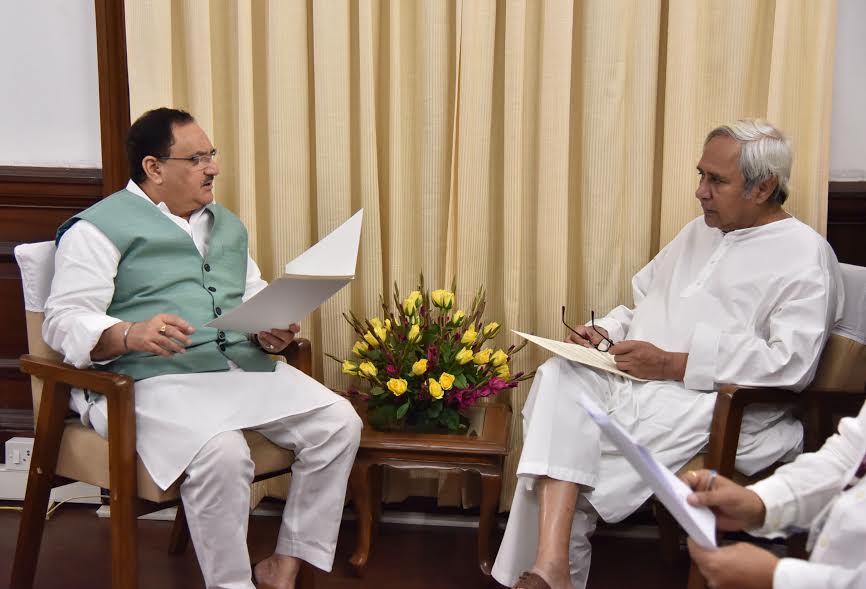 New Delhi: Chief Minister Naveen Patnaik met Union Health Minister JP Nadda today at the Sansad Bhawan and discussed the fast completion of the five upcoming medical colleges in the state.
Chief Minister informed the Union Health Minister that over last several years the State Government has made sustained efforts to improve the overall health of people of Odisha. This, he said, is quite evident from remarkable improvements registered in many health indices of the State as brought out by the recently published 4th round of the National Family Health Survey (NFHS-4). He mentioned that Odisha has achieved the highest rate of decline in Infant Mortality Rate, which has fallen from 96 per thousand live births in the year 2000 to 40 in the year 2015-16, and is better than the National Average of 41. Similarly, Odisha has achieved a sharp increase in institutional deliveries to 85 per cent, up from 35 per cent in the last survey. Significant improvements have also been reported on family planning, ante-natal care of mothers, reduction of anaemia in mothers and reduction inmalnourishment, he added.
Chief Minister mentioned that works relating to five new Medical Colleges at Baripada, Koraput, Balasore, Bolangir and Puri are continuing in full swing and already two Medical Colleges at Baripada and Koraput are ready to start their first batch admission from the ensuing 2017-18 session. He stated that the State has received only Rs.170 crore till date as against the committed Central Share of Rs.567 crore for these colleges and urged upon the Hon’ble Union Health Minister to release the balance Central Share of Rs.397 crore at the earliest and give Letters of Permission to the two Medical Colleges at Baripada and Koraput, to enable them to start their first batch admission from 2017-18.
Chief Minister further informed that the State Government of Odisha has decided in principle to merge the existing National Health Insurance Scheme, Rashtriya Swasthya Bima Yojana and the State Health Insurance Scheme, Biju Krushak Kalyan Yojana under the new National Health Protection Scheme (NHPS). He added that Government of Odisha has also decided to fully support additional 38.80 lakh beneficiary families from the Socio Economic and Caste Census (SECC) database in addition to 37.17 beneficiary families approved by Government of India for coverage under NHPS. He impressed upon the Union Minister to allow the State to use the NHPS IT platform for the additional 38.80 lakh beneficiaries to be fully supported by the State Government in the first phase of NHPS.
Hon’ble Chief Minister highlighted several initiatives undertaken by the State for strengthening Cancer Care including Cancer Chemotherapy Programme at 15 District Headquarter Hospitals under which 1025 cancer patients have already been administered chemotherapy and palliative care, free of cost, till February, 2017. He mentioned that the State Government plans to start a comprehensive cancer care programme during 2017-18 with the State Plan Budget for spreading cancer awareness at the community level and for upgradation of simple cancer diagnostics and early management services like onco-surgery and chemotherapy. Further, four Radiotherapy units are proposed to be set up in 2017-18 for which a budget provision of Rs.4 crore has been kept. He urged upon the Union Health Minister to approve the four Tertiary Cancer Care Centres at Capital Hospital, Bhubaneswar; VSS Medical College and Hospital, Burla; MKCG Medical College and Hospital, Berhampur and District Headquarter Hospital, Kalahandi to supplement the State’s efforts for strengthening cancer care in peripheral and remote areas.
Chief Minister informed the Union Health Minister that the construction work on establishment of a Regional Institute of Paramedical Sciences (RIPS) at Bhubaneswar approved by Government of India in 2010 has not started till date despite the State handing over the possession of 10 acres of required land for the purpose to HLL Life Care Limited. He impressed upon the Union Minister to initiate necessary steps for early establishment of the Regional Institute of Paramedical Sciences at Bhubaneswar.
Chief Minister stated that the recent decision of Government of India to limit the number of attempts to three for appearing in the National Eligibility cum Entrance Test – Under Graduate (NEET-UG) is a cause of concern, particularly for students belonging to weaker sections and urged upon the Hon’ble Union Minister to consider the genuine concerns of the students of Odisha and remove the said restriction.
Union Minister for Health & Family Welfare appreciated the remarkable achievements made by Odisha in improving various health indices and overall health of the people of the State and assured that the concerns raised by the Chief Minister would be addressed on priority and that every effort will be made by the Union Government to support and supplement the State’s efforts in improving the critical health infrastructure and outreach of health services in the State.
Hon’ble Union Minister stated that adequate provision has been kept in the budget for 2017-18 for new Medical Colleges and the balance Central Share of Rs.397 crore will be released to Odisha at the earliest. He assured that the proposal of the State Government seeking use of National Health Protection Scheme IT platform for the additional 38.80 lakh beneficiary families proposed to be fully supported by the State Government in the first phase of NHPS will be considered favourably. The Union Minister mentioned that the Central Government has already approved a State Level Cancer Care Centre at Cuttack at an estimated cost of Rs.120 crore. Further, he stated that financial assistance for another three Tertiary Cancer Centres @ Rs.45 crore per Centre will be provided at the earliest for Centres at VSS Medical College & Hospital, Burla; MKCG Medical College & Hospital, Berhampur and District Headquarter Hospital, Kalahandi. As regards the fourth Centre at Capital Hospital, Bhubaneswar, Union Minister assured to consider it favourably. The Union Minister also agreed to look into the proposal for establishment of Regional Institute of Paramedical Sciences at Bhubaneswar and doing away with the restriction on number of attempts for students appearing in the National Eligibility cum Entrance Test – Under Graduate, which is presently under examination of the Oversight Committee set for the purpose.