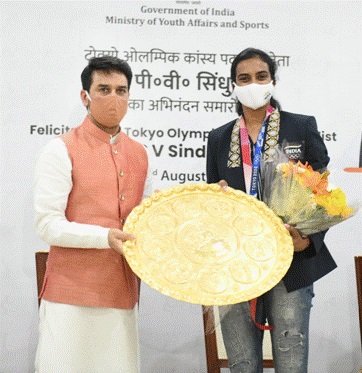 Speaking at the event, Shri Thakur said, “PV Sindhu is amongst India’s greatest Olympians. She is India’s icon, inspiration and has caught the imagination of every Indian who dreams of playing for the country. Her incredible achievement – that of winning two Olympic medals in two consecutive Olympic Games will inspire a generation of budding athletes. Her success shows how the Target Olympic Podium scheme of the government has nurtured our Olympic hopefuls towards a podium finish. Just before setting off for Tokyo Olympics, she had an interaction with Prime Minister Narendra Modi and right after her victory he was the first person to call her and congratulate her. The nation of 130 crore Indians is thrilled by her smashing performance!”

A visibly elated Sindhu said, “ I would like to thank each one of my fans because of the support and though we played without fans in the stadium, but I am sure billions have supported me from India and this success is the result of their wishes. I would like to thank my parents for their constant support and scarifies and my coach for working with me and making this dream come true.”she said.

Addressing on the occasion, SmtNirmalaSitharaman said that Sindhu is a great sportsperson and she has repeatedly proved herself so. What has contributed to her success are meticulous preparation, world class training facilities at Gadchibowli, a great coach, family support and Sindhu’s own perseverance, grit and excellence in the field of play.” It’s a day when all Indians can derive absolute inspiration and motivation, ” she said. She further added “What an inspiration, what a motivation she will be for generations to come. ”

Speaking at the occasion Shri Reddy said, “P.V Sindhu’s podium finish at the Tokyo Olympic Games is a story of many firsts – She is the first Indian woman to win 2 Olympic medals and the only Indian to win medals in 2 consecutive Olympic Games. Behind these statistics is a lifetime of passion, grit and sacrifices. Early morning practices and late-night workouts were her “new normal” for many years. As a Telugu, seeing a Telugu bidda and a Hyderabadi achieve this fills my heart with pride. Further, Sindhu’s success will inspire not just 65 lakh Hyderabadis or 6.5 crore Telugus or 65 crore Indian women and girls but the whole of India. I congratulate her once again on this spectacular achievement.”

Speaking at the event Shri. Pramanik said, “Kudos to PV Sindhu for creating history by becoming the 1st Indian Woman to clinch her 2nd consecutive Olympic Medal. Her dedication, sincerity, humility and sporting spirit will continue to be an inspiration for all. India is proud of you”.

The Government funded Sindhu to the tune of nearly Rs 4 crore in the last Olympic cycle, including travel to 52 international tournaments besides training camps in Hyderabad. Besides, in collaboration with Telangana Government, it facilitated her training in the Gachibowli Stadium ahead of the Olympic Games.

Sindhu is the second Indian athlete to return home with a medal from Tokyo2020 after weightlifter MirabaiChanu who won the 49kg class silver on July 24. Boxer LovlinaBorgohain, who is assured of a 69kg class medal, will compete in the semifinal against BusenazSurmeneli (Turkey) on Wednesday.