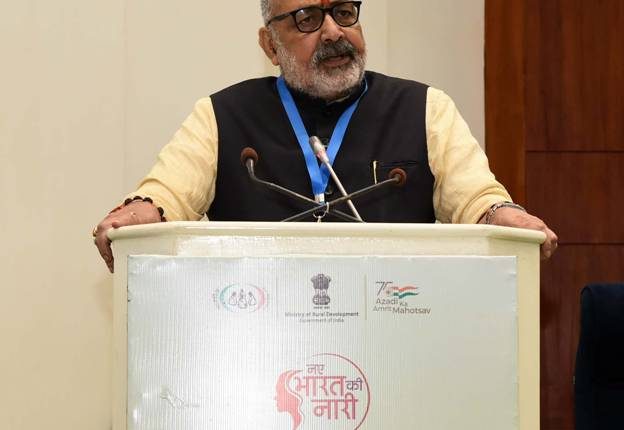 Emphasizing Mission 1 lakh, Shri Giriraj Singh said that the objective of the Ministry is to enable a maximum number of SHG women to earn Rs. 1 lakh per year. To increase the income of these women, he said that it is being thought of connecting rural women with the PM Jan Aushadhi Yojana to make them ‘Jan Aushadhi Suvidha Sakhi’ and to give them loans up to 5 lakh for setting up medical shop. Similarly, in collaboration with the Ministry of Petroleum, SHG women are also being considered to make them micro gas distributors at the village level.

Speaking on the occasion, Shri Giriraj Singh said Rural women with its entrepreneurial spirit is emerging as Naye Bharat Ki Naari. Shri Singh added that the positivity reflected by participants today was remarkable and these are the women who are going to make a huge contribution in PM Modi’s mission of 5 trillion economy. He said that he is confident that the women were on a rapid path of progress would soon earn more than 1 lakh monthly and not just more than Rs 1 lakh annually.

Appreciating the very low NPA rate maintained by SHGs, The Minister requested the banks to give priority to these women while disbursing loans.

In the event, Lakhapati women (poor rural women who now earn more than rupees 1 lakh annually) and members managing Gender Justice Centre shared their stories of transformation. Best performing Cluster Level Federations and best performing Public Sector Banks were awarded at the event. The PIA who has trained / placed maximum women candidates under DDU-GKY were also felicitated. The award winners were selected from across the nation and joined the event in New Delhi.

Sadhvi Niranjan Jyoti who joined virtually from Kutch, Gujarat, congratulated the award winners said that these #NayeBharatKiNaari are creating the #AtmaNirbharBharat as envisioned by Prime Minister Shri Narendra Modi. She added that though we are celebrating International Women’s Day today, in Indian culture, every day is women’s day and our darshan is Yatra Naryastu Pujyante, Ramante Tatra Devta, and SHG women have proved it with their success that they are equal to men in economic endeavours too.

Joining the programme in virtual mode from Mandla, MP, MoS(RD) Shri Faggan Singh Kulaste said that story of new India is scripted by rural women where women collectives have shown the spirit of #TogetherWeCan. He added that because of the visionary policies of Prime Minister Narendra Modi every part of India is reaping the benefits from the SHG revolution.

Highlighting the priorities of the MoRD, Secretary Rural Development expressed the commitment of the Ministry in ensuring reaching out to over 10 crore rural poor women as SHG members and helping in the creation of at least 25 million additional livelihoods for these women.

DAY-NRLM under the Ministry of Rural Development (MoRD) celebrates every year Women’s Day in a grand way showcasing the best practices being followed across India in terms of bringing parity, equity and opportunity to the rural poor and vulnerable women and celebrating their achievements in various aspects of life. DAY-NRLM always motivates SHGs and their federations to proactively work for the upliftment of deprived women in rural areas.