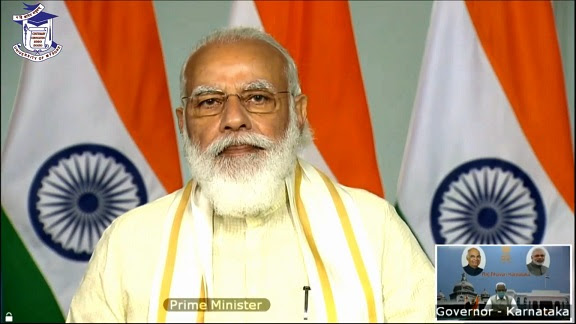 Mysuru: As the University of Mysore celebrates it’s 100th Convocation today, on Monday the 19th, of October 2020, it was only appropriate that the University while completing 104 years of its existence, also marked the occasion with the launch of a variety of Online Degree Programs, taking a significant step into the future, its next Century.

The event is to be presided over by none other than Prime Minister Modi himself, who is a known proponent of digital technology as a tool for reaching each citizen, as well as making India a Global power. Along with PM Modi who presided over this momentous occasion, addressed the gathering virtually via live video feed, the Chancellor of the University Hon’ble Governor of Karnataka Shri Vajubhai Vala, the Deputy CM & Minister for Higher Education of Karnataka Dr. Ashwath Narayan C.N., and Vice Chancellor of the University Prof G Hemantha Kumar will also be present.

University of Reading: Caring Across Borders And…

The Government’s initiative of creating a mechanism that would allow Universities to share and offer courses to students enrolled in other Universities – SWAYAM, was officially unveiled to the world back in 2017. While SWAYAM inspired Universities towards developing online courses or MOOCS for Inter-University use, the government also recognized the need to go digital in the Distance Learning Space, and in 2018 the MHRD via the UGC formally announced a policy to promote Online Degree Programs. Regulations were put in place to ensure quality & credibility of the Online delivery of Programs, and it was mandated that such programs would be delivered by Universities only via an updated version of the SWAYAM Platform, or via platforms approved by the UGC. COVID Response accelerated the need for adoption of these programs, and steps were taken to make approvals for India’s top 100 Universities easier and quicker.

UOM again proved to be a pioneer, and using University18’s ‘U18 eVolute’, an edTech Platform built for Indian Universities, launched these new Online Programs in record time. University18 is an India based Learning Technology Company with offices in 3 Continents, and has been a choice platform for global clients, currently serving users in over 150+ Countries. With the advent of Online Education in India, it launched a specially Made-For-India Online Education Platform – ‘U18 eVolute’, which became the first platform to be approved by the UGC as one that complements and extends the capabilities of SWAYAM, delivering full-fledged Online Programs in compliance with the UGC Guidelines. U18’s engagement with the University of Mysore shall ensure that UOM Programs become available to the U18 network across 150+ Countries Worldwide, immediately.

With UGC allowing eligible Universities to apply indicating their choice of Programs and Platform by the 30th of October, and Univesity of Mysore’s launch of Online Programs on U18 eVolute, one can hope to see many more such programs being launched, and India hopefully shall firmly be on the fast track to putting its technology prowess to good use in the field of Education, not only serving student across the Nation, but across the World as well. A true ‘Vishwa Guru’ once again.

University of Exeter: Researchers want to hear from artists about their experiences –…

iednewsdesk Jun 15, 2021
Hidden inequalities in access to health, social care and welfare support faced by refugee and other migrant…

University of Exeter: Researchers want to hear from artists about…

University of Exeter: Impact of COVID-19 on weddings reinforces need…

University of Bristol: HIV has detrimental effect on children’s growth…