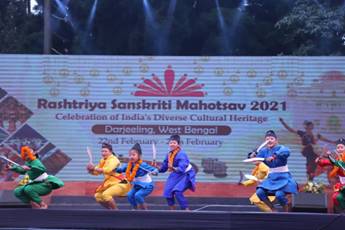 There was a huge crowd who witnessed and enjoyed the programme. Visitors toured the craft stalls, interacted with the artisans and shopped several products. The Visitors also enjoyed the creative ambience and took photographs with all the artistic installations especially those of magnificent Dokra art.

Union Minister of State for Culture & Tourism (Independent Charge) Shri Prahlad Singh Patel inaugurated the three days Mahotsav on 22nd February 2021 in Darjeeling. He highlighted the importance of Culture for the youth and how it can engage gainfully the young artists from various areas including rural areas.

RashtriyaSanskritiMahotsav, the flagship festival of Culture Ministry has been organized since 2015 with the active participation of Seven Zonal Culture Centres andhas been playing a pivotal role to take the vibrant culture of India out to the masses instead of confining to auditoria and galleries. It has been instrumental in showcasing, folk and tribal art, dance, music, cuisines & culture of one state in other states reinforcing the cherished goal of “Ek Bharat Shreshtha Bharat” and at the same time providing an effective platform to the artists and artisans to support their livelihood. Earlier RashtriyaSanskritik Mahotsavhave been held till date since November, 2015 in various states and cities such as Delhi, Varanasi, Bengaluru, Tawang, Gujarat, Karnataka, Tehri and Madhya Pradesh.