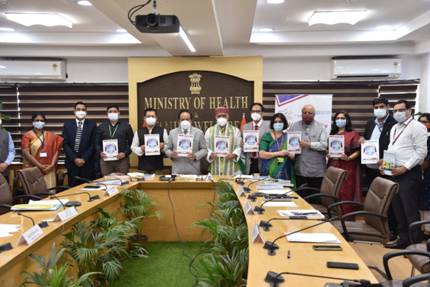 Dr. Harsh Vardhan also released the report by ICMR-AIIMS and a Pictorial guidebook on “Prevent Hearing Loss” by DGHS-PGIMER.

Expressing his appreciation, Dr Vardhan congratulated AIISH for launching six new ‘Outreach Service Centres for Communication Disorders’ across the country. The Union Minister said, “ The number of individuals existing with such disorders and the lack of professionals and specialists to cater the need for this population warrants the need for initiation of Outreach Service Centers in the hospitals across the country.” He added, “We should aim to reach out to the underserved and unserved areas in the country to cater to the needs of individuals with communication disorders. This will enable early identification and diagnosis of communication disorder and early intervention, thereby preventing further deficits in speech, language and cognition and facilitating the overall development of the child.”

Dr. Harsh Vardhan said, “This is a very important day for me personally. Good hearing and communication are important at all stages of life. Timely action is needed to prevent and address hearing loss across the life course.I have seen and understood people with communication disorder from my medical days. Communication disorder not only affects the individual, but can have far-reaching effects on the entire family. When these uncommon, unrecognized disabilities go undiagnosed and unmanaged, they can have a significant detrimental effect on the overall development. It becomes very important to raise awareness on how to prevent deafness and hearing loss and promote ear and hearing care across the world.”

Emphasizing on the need for early identification and early intervention to control and manage communication disorders, the Union Minister said, “Hearing impairment can lead to poor speech and language development in children. This can in turn affect their overall development of communication.However, if these are identified early and early intervention is initiated, it will reduce the negative consequences of the disorder.”

He further commented on the lack of awarenessregarding the early signs and treatment among general public. He said, “People are often unaware about the need for early screening and treatments available for communication disorder.Parents are often inexperienced about hearing disability at an early age. Looking at the current data available, there is an urgent need to prevent the occurrence of these communication disorders by taking appropriate measures through strategies likepublic education, early detection followed by early and continued intervention to restore effective functioning.”

The Union Minister also raised awareness about the dangers of continuous loud noise and the impact it can have on the ocular health of people. Speaking on noise induced hearing loss, Dr. Harsh Vardhan said, “This is a sensitive issue and we should work on it. Those who oppose blaring noise and sounds beyond 10 pm in the night are aware of the grave danger this persistent noise has on the ear health of everyone.”

Shri Ashwini Kumar Choubey said, “I express my happiness on the occasion of World Hearing Day and on this launch of the Outreach Service centers. India is emerging as a world power and such institutions supplementthe goal of Health for All.” “Communication disorder is a matter of challenge in front of all of us. There is a need to generate awareness among common man and ensure that all people get benefitted by it. Every child should be checked properly, and early treatment should be ensured in case of communication disorder,” he added.