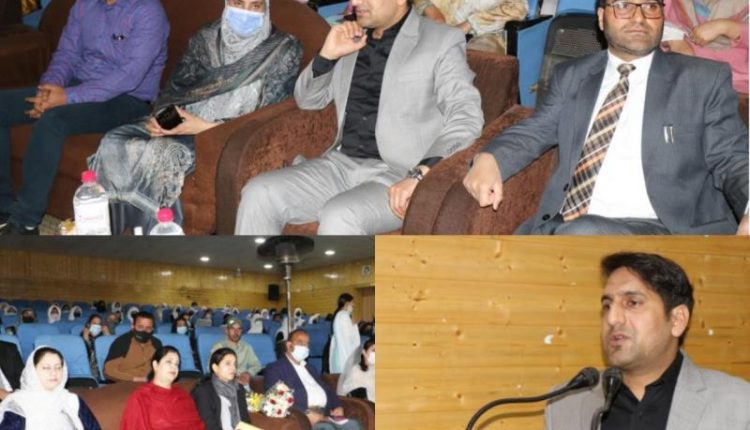 One day Workshop on “Legal Rights of Women” held at Srinagar

SRINAGAR : To sensitize Women and Girls about their Legal Rights and to encourage legal access in the matters of crimes against the women, the District Level Centre for Women (Mahila Shakti Kendra) Srinagar in collaboration with District Legal Services Authority (DLSA) Srinagar Saturday organized a day long workshop on “Legal Rights of Women” at Government Girls Higher Secondary School(GGHSS), Kothibagh, here.

Deputy Commissioner Srinagar, Mohammad Aijaz Asad, who is also the charman District Mahila Shakti Kendra was the Chief Guest on the occasion.

While Secretary DLSA, Noor Mohammed Mir attended the function as Guest of Honour.

Speaking on the occasion, the DC said that women folk is a unique creature on the earth which balances rights and duties with utmost ability.

The DC appreciated the efforts of the organizers for conducting such sensitization camps to create awareness regarding legal rights among the women folk. He said the purpose of such programmes is to make women folk aware of the laws/statutes and know their legal rights to eliminate crimes against the women. He further said the society will not develop unless the status of women improves.

Asad said women empowerment should begin at home and there should be no discrimination by the parents towards their children based on gender. The male and female child should be treated equally then only it is possible to achieve the desired results.

The DC also stressed upon effective implementation of all schemes and programs that are meant for welfare of women and children. He said that the development of society is directly related to women empowerment.

Describing recent acid attack as lack of proper gender sanitization and dearth of moral education, the DC stressed the need of incorporating issues like this in educational curriculum besides responsibility of Active parenting which starts from home.

The DC also said that women victims also have Right to Zero FIR at any police station irrespective of where the incident occurred to provide help on a fast track basis.

Secretary, DLSA highlighted constitutional provisions regarding women empowerment. He said that DLSA is always available to the women in distress and the Authority is working for the welfare of the suffering women. He said DLSA is providing legal aid to many women on a daily basis and also apprised the gathering about basic rights of women and schemes available for them in legal institutions.

Other speakers also highlighted the issues related to women and provided information about women’s rights.

Among others, District Social Welfare Officer the event was also addressed by a number of lawyers from District Legal Services Authority-Srinagar who spoke on various topics like Rights of Women; Legislation for Protection of Women; Violation of Women Right and its Remedies; Welfare Schemes for Women, etc.

Earlier, District Social Welfare Officer Srinagar, Mohammad Ashraf Akhoon who is also the Nodal officer of MSK welcomed the guests and highlighted objectives of the Mahila Shakti Kendra. He said Mahila Shakti Kendra is meant to provide one stop convergent support to the local female and these centres are considered as a Ray of Hope for all kind of assistances provided under a single window.

“The Mahila Shakti scheme provides an interface for rural women to approach the Government to avail entitlements besides to empower them through awareness generation training and capacity building”, he added.

The workshop concluded with the vote of thanks presented by Women Welfare Officer, MSK Srinagar Ruqaya Ashraf.

iednewsdesk May 20, 2022
The University of Johannesburg’s (UJ) College of Business and Economics (CBE) School of Accounting (SOA)…

RWTH: Presentation of the Christian Patermann Prize 2022 to Sandra…