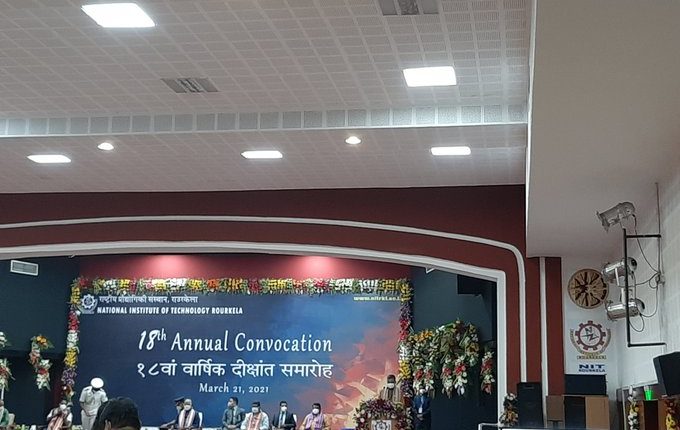 One Objective Of The National Education Policy Is To Make India A Global Knowledge Super Power In 21st Century And Institutions Like Nit Rourkela Have To Play A Major Role In Achieving These National Aims: President Kovind

Rourkela: One objective of the National Education Policy is to make India a global knowledge super power in 21st century and institutions like NIT Rourkela have to play a major role in achieving these national aims, said the President of India, Shri Ram Nath Kovind. He was addressing the 18th annual convocation of NIT Rourkela in Rourkela, Odisha today (March 21, 2021).

The President said that as the 2nd largest Government run Technology Institute in Eastern India, NIT Rourkela has made significant contribution to the field of engineering and technology. For over six decades, this institution has been enriching the pool of technical professionals in the country.

Pointing to the fact that NIT Rourkela has students from all over India and also from other countries, the President said that the community of over 7000 students studying in this 700 acre campus represents rich diversity. It increases cross-pollination of learning and promotes understanding between different cultures. It also strengthens people-to-people ties between nations.

Students of NIPS are Another Step Ahead to Represent India…

Raising the issue of less participation of women in technical education, the President said that in the most of the convocations he attended across the country, he noticed that girl students are outshining boy students in liberal arts, humanities, medical sciences, law and several other areas. However, it has been observed that the enrolment of women in technical and scientific disciplines is low. According to a recent survey, enrollment of women in Engineering and Technical Institutes across India is only about 20 percent. He emphasized that girls should be encouraged to pursue technical education and excel in the same manner as they do in other areas. He said that growth and excellence of women in technical areas would add a new dimension to national development. It would promote gender empowerment at the higher levels in the field of science and technology. It would also help women break the glass-ceiling in one of the most important spheres in the world of 21st century.

Speaking about the need of “Universities’ Social Responsibility” in line with “Corporate Social Responsibility”, the President said that universities and institutions must contribute towards empowering the community in their surroundings. He was happy to note that NIT Rourkela has adopted five villages, as part of ‘Unnat Bharat Abhiyan’ and upgrading science laboratories as well as providing computer education in those villages. He also noted that a Poverty Alleviation Research Center at this campus works for the less-privileged people of Kalahandi, Balangir and Koraput region of Odisha. He appreciated NIT Rourkela for these commendable initiatives.

Scientists deliberate on possibilities, challenges & scope of AI technologies at the launch of USIAI