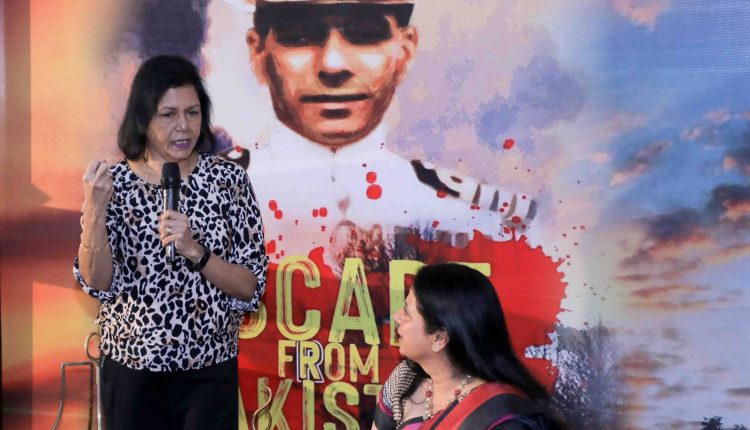 Bangalore  : After the successful launch of her book ‘Escape From Pakistan’, Author Debora Ann Shea along with Dr. Marianne De Nazareth hosted a soiree discussing and touching crucial junctures from the story of her father -Commodore Jack Shea, on Thursday November 25th, 2021 at The Lounge, 25 Resthouse Crescent, Opp. The Park, Bangalore at 6.00pm.

Escape From Pakistan is more than a pulse-pounding thriller; while it gives a firsthand insight into the precarious times post partition in 1965, it is also a tender and inspiring story of Captain Jack Shea, who masterminded the escape, with brutal consequences to himself. Through her book, Debora makes a long-overdue tribute to her father Commodore Jack Shea – a gallant mariner who epitomized courage, loyalty and survival against overwhelming odds.

Brushing the dust off his early life as a child dispossessed of parental love since birth, the book traverses through Jack’s growing up years with his maternal grandparents, and with a name that belongs neither to his biological father or mother: “Garnet Milton Shea.” It throws light upon his life journey from a boy to a young man who joins the Royal Indian Navy, marries a pretty young teacher, Dorothy Hope, and nurtures a wonderful family and a rewarding career.

How life changes for this man as he is posted to Karachi, Pakistan as Naval Attaché in the Indian High Commission a few months before the Indo–Pak war of 1965 is journaled adhering to years of research and deep study along with Debora’s own memories of those days. It is an account of Naval Attaché Captain Jack Shea who was chosen for a mission to bring home safely the First Secretary at the High Commission who was dangerously close to being booked for espionage in Karachi. While he manages to bring the family back to New Delhi safe by cargo ship, he lands himself into deep trouble, gets battered, thrashed and lies in comatose for months in a hospital in Karachi.

Debora unveiled her book last month in New Delhi amidst friends, family and high ranking personnel from the Indian Defence Forces. Today as she revisited the book to share her favourite excerpts, an emotional Debora remarked, “This book is very close to my heart. As I am back to base I realize that I am fulfilling a dream I hold so dear and reading out Escape From Pakistan is an extremely wholesome experience for me. I really hope that I have touched hearts with my honest effort to do justice to the service that my father has offered to our nation. My childhood memories of him being away from home are very vivid and my book is just a written document of those bittersweet memories along with carefully examined archival resources, letters and diaries and various personal accounts.”

Dr. Marianne de Nazareth said, “Escape from Pakistan for me was a labour of love by a loving daughter about her brave naval officer dad. It is a story worth telling and makes a riveting read. Debora Ann Shea has told us a story like no other and I am so happy to have been a part of its final release as a published book by Penguin no less.”

The story stirs one to think how trying times can crush the bones but not the undying spirit if one has the will. Jack not only recovers, but completes his tenure in Karachi and goes on to receive the Ati Vishisht Seva Medal from the President of India. He assumes command of the 11th Destroyer Squadron, plays a pivotal role in the Indo–Pak war of 1971, held the position of the Director of Personnel for two years in the Naval Headquarters, South Block, Vijay Chowk, New Delhi and retires in 1976 as a Commodore.