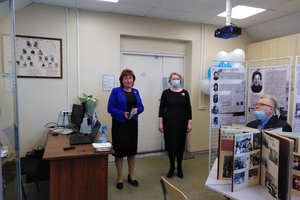 On the basis of the Institute of Foreign Languages ​​of PetrSU, the Museum and Exhibition Center “The World of Languages ​​and Cultures” (IEC ILL) was opened, which is a subproject of the Museum of Science of PetrSU.
The opening was preceded by a large-scale stage of concept development, protection of subprojects, equipment of the museum space and preparation of the exposition “FI / IIY: people – dates – events”.

The opening ceremony of the museum was attended by Vice-Rector for Research V.S. Syunev, Vice-Rector for International Affairs M.S. Gvozdeva, Director of the Museum of Science of PetrSU I.M. Suvorova, Director of the Institute of Foreign Languages ​​(IIL) I.V. Kreneva, curator of the Museum and Exhibition Center of the Institute for Foreign Languages ​​of PetrSU “The World of Languages ​​and Cultures” E.N. Vorotilina, curator of the Student Scientific Society of IIYa S.R. Nedbailik, Head of the Department of German and French Languages ​​I.A. Kotyurova, head of the English language department V.O. Pavlov, deputy director of the Institute for educational work O.A. Veselovskaya, senior lecturer of the department of German and French languages ​​V.P. Petrov, as well as in the virtual space on the ZOOM platform, the students of the institute who prepared the exposition “FI / ILL: people – dates – events”

The exhibition evoked fond memories of the events of their student days in everyone. V.S. Syunev wished the students to keep records of the events they witness, since any event will one day become history. M.S. Gvozdeva emphasized the merit of the university leadership in promoting the idea of ​​creating a Museum of Science and translating this idea into reality in a variety of formats, material and virtual, and herself made a significant contribution to the collection of the IEC – a book about travel in French. I.V. Kreneva expressed hope that the museum and exhibition center will accumulate and comprehend all the experience associated with teaching foreign languages ​​in Karelia, accumulated not only within the Institute of Foreign Languages ​​and PetrSU, but also within school education. THEM.

Curator of the Museum and Exhibition Center IIL of PetrSU “The World of Languages ​​and Cultures” E.N. Vorotilina pointed out the special role of museum pedagogy for students of pedagogical areas of training. It is noteworthy that the opening of the ILL Museum coincided with the first day of classes in the Master’s program in the pedagogical direction of training. The new master’s program “Methods of teaching foreign languages ​​and intercultural communication”, prepared by the faculty of the institute, was launched in the 2021/22 academic year.

Undoubtedly, the expositions of the museum and exhibition center will be interesting and useful not only for undergraduate students, but also for graduate students studying English, French and German.