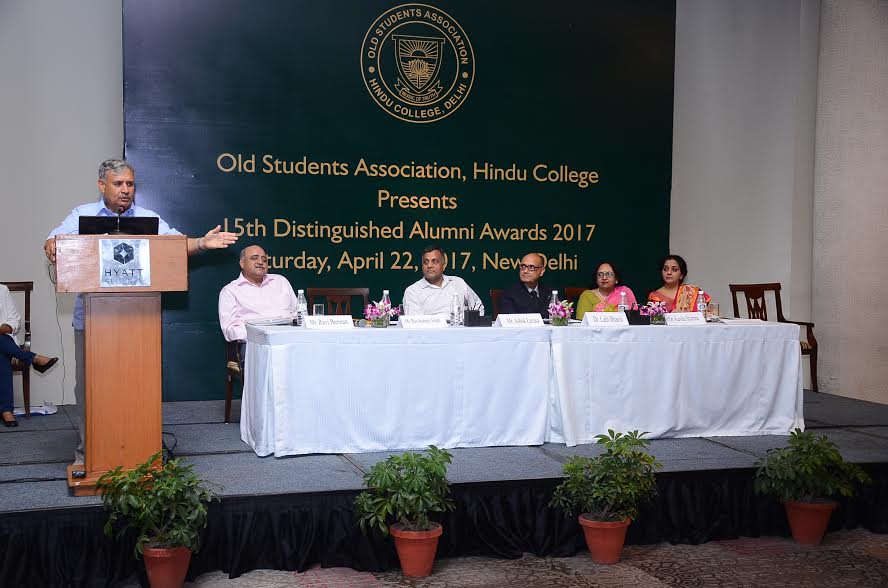 The Hindu College- Old Students Association (OSA) hosted the 15th edition of “Distinguished Alumni Awards” today at The Hyatt Regency. These awards were conferred upon the alumni of the College who have excelled and achieved laurels in their respective fields of work and expertise.  This year 15 alumni from fields such as Law, Police Service, Civil services, Corporate, Sports, Media, and Journalism amongst others were awarded.

An alumnus of Hindu College and past awardee as well, Shri Rao Inderjit Singh said, “Our alumni association is certainly way ahead of other college or universities’ alumni bodies, and there should be a constant effort to keep this flag flying high. This award ceremony is not merely a platform to honour the old students, but also provides us with an opportunity to know and meet fellow Hinduites which would eventually make this endeavour a greater success in the days to come.”

Shri Ashok Lavasa, another alumni of Hindu College, said, “I would like to congratulate the winners and complement OSA and everyone involved in this initiative for the commendable job that you are doing in recognizing the flag bearers of Hindu College.”

Speaking on the occasion, Mr. Lalit Bhasin, President, OSA Hindu College said, “Hindu college has been churning out students who have not only done well for themselves or brought laurels to the college, but also made the country proud. We have instituted this award ceremony since the year 2000 for recognizing the role of our distinguished alumni all these years. Lately, we also have started honouring the Young Achievers to encourage them to pursue whichever path they have chosen in life, besides the one who have already distinguished themselves. I would like to thank each and everyone who contributed to the success of Old Students Association of Hindu College and in making the Distinguished Alumni Awards as one of the most anticipated events of the year.”

Shri Ravi Burman, Secretary, Old Students’ Association (OSA), Hindu College said, “We are glad to have hosted the 15th Distinguished Alumni Awards today, which carries the legacy of close to two decades. I thank all the alumni who have graced the occasion with their presence and contributed in their own way to make this initiative a grand success. The OSA of Hindu College has been the most active alumni association among its peers. I urge all the alumni to take part in the OSA’s activities and make it even more vibrant.”

The Old Students Association (since the Centenary Celebrations in 1999-2000) has been annually recognizing its distinguished alumni in a glittering celebration that grows every year by leaps and bounds.

The Hindu College is recognized as one of the premier academic institutions in the country. The College is committed to providing the leadership and direction for the times ahead in every sphere of human enterprise and Endeavour.

The 15th Distinguished Alumni Awards-2017 honoured the following alumni of the Hindu College:

Jasleen Royal, while accepting the award, enthralled the audiences with a popular number from her recent hit movie ‘Dear Zindagi’. The OSA also launched the Alumni Portal www.hinducollegeosa.org and the 11th edition of annual newsletter ‘The Alumni’ for its alumni at the event.