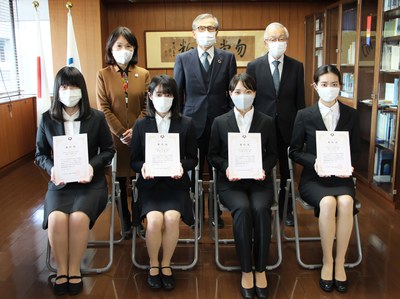 Osaka University holds social gatherings between female graduate students in science courses and companies and research institutes involved in MEXT’s Initiative for the Implementation of the Diversity Research Environment (Collaboration Type) in order to develop female graduate students, improve their ability to research, and support them after their enrollment in doctoral programs.

*This award was established through donations to Gender Equality Promotions in the Osaka University Foundation for the Future by Osaka University Professor Emeritus and Former Vice President IKEDA Masao.

President NISHIO Shojiro presented the four award-winning female graduate students with their award certificates and supplementary prizes at the ceremony held in the president’s office on Monday, December 21, 2020.

Professor Ikeda, who was pivotal in making this award possible, congratulated the award recipients and expressed his expectations for their future endeavors.

At the meeting following the ceremony, the recipients talked about the content of their research and their vision of researchers with President Nishio, Professor Ikeda, and Executive Vice President KUDOH Mayumi in a friendly atmosphere.

In response to the expectations and encouragement from President Nishio, Professor Ikeda, and Executive Vice President Kudoh, the recipients reaffirmed their commitment to research.