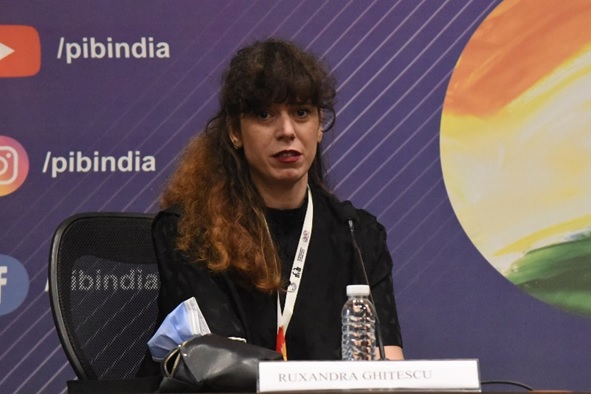 Otto the Barbarian highlights mental health issues that society does not know how to deal with: Director Ruxandra Ghițescu

Panaji: “Many a day, Otto had to deal with his griefs, his feelings of responsibility towards his girlfriend’s suicide. Through his story, Otto the Barbarian highlights mental health issues that society does not know how to deal with. Mental diseases remain unidentified. The film aims to create awareness about depression, something that is not easily recognized. Above all, I wanted to emphasize the most on the need for empathy – towards the grief and hopelessness of people who face the suicide of someone close to them.” This is how Director Ruxandra Ghițescu explained the motivation for her IFFI 51 film Otto the Barbarian, a moving tale on the traumas of adolescence. She was addressing a press conference in Goa today, January 23, 2021, at the 51st International Film Festival of India (IFFI). The Romanian film has made its Indian Premiere at the festival yesterday.

The protagonist Otto is a 17-year old boy from Bucharest, who had to face his girlfriend Laura’s suicide. He then becomes involved in the social services connected with investigation into her suicide. He is caught in a vicious circle created by his parents, his mute grandpa and Laura’s mother. Laura is still part of his life through the video recordings that the boy edits constantly, in his desperate attempt to make sense of the tragic turn of events. Throughout this process, Otto is having to shoulder his share of responsibility for what has happened.

The Director said that the film aims to begin a conversation on the agony undergone by people like Otto, who lose their loved ones to suicide. “This film is not constructed as a discourse. It is meant to open up a dialogue with the spectators and to raise some questions. It doesn’t provide certain answers to those questions.”

Ghițescu has taken an attempt to bring to the fore the dismal face of grief. “I believe that these kind of dramatics like grief, loss, suicide and murder are in most films very stylized and romanticized. Against this backdrop, the film aims to construct an anti-cinematic experience. We wanted to construct an anti-hero in a negative film where grief really showcases its ugliness”.

The film urges us to also look inwards, at the facades we erect to hide our true selves. “The film questions the various masks we use to hide behind in our day-to-day life – the way we grow up to live in patterns we recognize around us.”

“The film is a story on adolescence, on the fragile age when morality is not a common concept that grown-ups live by”, explains Ghițescu. “In teenage, time has a different feeling, the present moment expands and compresses and everything has to happen at that moment.” Punk music, associated with teenagers, has been used to dictate the rhythm of the film, the Director further informed. It signifies “living in the moment” – the motto of most teenagers, she says. “Personal factors were also summoned when the film was made.”

Ghițescu is a Romanian visual artist and filmmaker. Otto The Barbarian has also been selected in Sarajevo Film Festiva, CinEast Central and Eastern European Film Festival.

Why did she live and die a 70-year-old virgin: The First Death of Joana