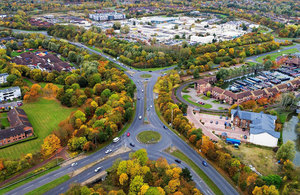 Construction of the Oxford to Cambridge expressway has been cancelled as analysis shows the benefits the road would deliver are outweighed by its costs.

Transport Secretary Grant Shapps has today (18 March 2021) announced the cancellation of the Oxford-Cambridge (Ox-Cam) expressway, after analysis confirmed the proposed project was not cost-effective.

Highways England had been developing potential options for a road link between Oxford and Milton Keynes. However, following close work with local partners since 2014, recent analysis shows that the benefits the road would deliver are outweighed by the costs associated with the project.

Building on the insight already developed by Highways England, the Department for Transport (DfT) will now investigate the need for more targeted road interventions in the area, recognising the vital role that transport investment has to support sustainable growth in the region, as noted by the National Infrastructure Commission. The DfT will work closely with Highways England and England’s Economic Heartland as the sub-national transport body to develop a study on proposals, which will also support the spatial framework.

The East West Rail scheme remains central to providing critical infrastructure within the Oxford-Cambridge Arc, with it not only improving connectivity but also bringing new jobs and opportunities to people in the area. In January, the government announced a £760 million funding commitment to deliver the next phase of East West Rail, which will create 1,500 skilled jobs and reinstate direct rail services between Bicester and Bletchley for the first time since 1968.

The Oxford-Cambridge Arc is home to cutting-edge research, globally renowned science and technology clusters and some of the most productive places in the country – we want to make sure it has transport fit for such an important region.

Our analysis shows the expressway cannot deliver such links in a way that provides value for money for the taxpayer, so I have taken the decision to cancel the project. But we remain committed to boosting transport links in the area, helping us to create jobs and build back better from coronavirus (COVID-19).

We will continue to work on more targeted, localised road improvements to boost transport in the region, alongside the transformational East West Rail, in which we have invested £760 million to deliver the next phase.

This is a welcome announcement that provides clarity to those planning for the region’s future between Oxford and Milton Keynes.

As our Transport Strategy sets out, delivery of strategic schemes, including East West Rail and mass transit systems, such as those being developed in Cambridgeshire and Milton Keynes, alongside harnessing smart technologies and targeted investment in the road network, are all essential if we are to ensure economic growth while achieving net-zero emissions.

Work on EEH’s Oxford to Milton Keynes connectivity study begins in March 2021. We will work with partners and government to explore the connectivity needs of this important corridor and identify the solutions required to support sustainable growth for the long term.

In February, the government launched the process for developing a long-term Oxford-Cambridge Arc: spatial framework, including transport policy, for local and national planning, and to inform investment decisions so that together, the government, local authorities and communities can unlock the long-term potential of the area in a sustainable way, improving the arc as a place to live and work.

NREL: Industry Proves To Be a Promising Prospect for Future Grid Flexibility

iednewsdesk Oct 19, 2021
As the share of renewable electricity generation grows, it is clear that future power systems will need to be…

University of São Paulo: Researchers develop a method that can make…