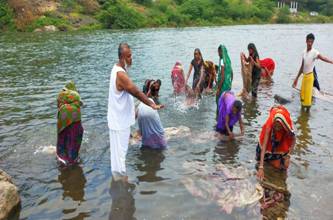 As the nodal agency working towards tribal empowerment, the team of TRIFED warriors is forging ahead in its endeavour to bring the tribal people towards mainstream development.

An ongoing initiativeof TRIFED is the work being done in Barwaniin Madhya Pradesh, where the local tribals are being trained in the Bagh, Maheshwari and Chanderi textile crafts to ensure continuous livelihoods. The first batch of the tribal beneficiaries are being trained by Padmashri Yusuf Khatri of the Bagh family, a pioneer in Bagh printing. The training started in February 2020 but had to be halted due to the COVID-19 pandemic, but was resumed recently only again. As a part of this training, these tribal artisans have learned to print bedsheets as of now. They are in the process of learning printing on sarees and suit pieces. A second batch of tribal artisans have also been identified to undertake the same training.

An area where the tribal population is predominant, Barwani in Madhya Pradesh has been listed as an aspirational district by the Government of India due its poor socio-economic development conditions. These aspirational districts have been identified in order to bring about a sustained development, which will be closely monitored by the senior officials of the Central Government. In this regard, the Govt.of India also designated few senior officers to guide and mentor the District administration of these aspirational districts in implementing and monitoring of the various development plans. There are no traditional crafts in Barwani district; however in the surrounding districts of Khargone and Dhar, a substantial number of local tribal artisans are engaged in Bagh printing and traditional weaving of textiles in the Maheshwari style. Upon detailed interactions with the District Administration and other stakeholders to work out some livelihood project for the local tribals, it was proposed by MD TRIFED, Shri Pravir Krishna that imparting training to the local tribal artisans in Bagh, Maheshwari and Chanderi art styles will lead in contributing to their continuous livelihoods. Subsequently, TRIFED prepared a comprehensive proposal for training in these three craft traditions. The proposal was funded then by Bharat Petroleum under its CSR quotaand Rs. 4.52 crores were sanctioned.

A group of people in a roomDescription automatically generated

This project is being implemented through Barwani District Administration for which 200 tribal beneficiaries were identified for this training. Further in order to make this training programme more impactful, Shri Yusuf Khatri from Bagh, the highly talented and experienced craftsperson in Bagh printing was requested to impart the training. The Khatri family are pioneers in this craft tradition and have been undertaking it for generations. His experience would definitely help.

The first batch of training for 23 tribal beneficiaries was started in Rehgun village in February 2020, however it was halted due to the lockdown. It recommenced in July 2020. The second batch of Bagh print training is expected to start shortly.A total of Rs. 1.88 crores has been allotted to train almost 1000 tribal women in Bagh print, Chanderi andMaheshwar styles over a period of 1 year.Master trainers for the Maheshwari and Chanderi traditions have also been selected. Currently, the district administration is identifying the tribal artisans for these trainings.

The handicrafts and products made by these clusters of artisans who will hone their skills by learning from the master craftsmen will be purchased by TRIFED and showcased and marketed at all Tribes India outlets across their country. They will also be on sale on Tribes India’s e-market platform, where the artisans can themselves upload and sell their products.

In a fast changing world, where modernity, technology and development have taken root and primitive indigenous ways of living are but a thing of the past, found in text books, this is a small effort in trying to preserve the arts and crafts and traditions of tribal communities.

TRIFED continues to strive in its mission to empower these disadvantaged people by promoting the economic welfare of these communities and bringing them towards mainstream development.