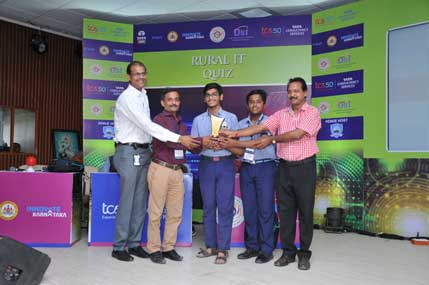 Gandhinagar: It’s quiz time now for the rural school students in Gujarat, after completing their district level rural IT Quiz and participating in the State Rural IT Quiz today at Kadi Sarva Viswavidyalaya, Gandhinagar now marching for the National Rural IT Quiz to be held at Bangalore in November.

Dr. Narottam Sahoo, Advisor, GUJCOST and Mr. Amit Maheshwari, Digital Transform Department, TCS Gandhinagar distributed the prizes. The winners received an educational scholarship of Rs 10,000/- and the runners-up Rs 7,000/- besides other prizes. All the finalists also received an array of prizes from TCS.

All participants were also given certificates and a quiz book, with Teachers receiving a special recognition certificate.

The National Rural IT Quiz programme aims at enhancing IT awareness amongst rural students, besides keeping them abreast of the latest developments in technology. The programme provides an ideal platform for the creative students of rural area to showcase their talent in information and communication technology and to make their career and future in the digital world.

Gujarat Council on Science & Technology (GUJCOST), working under the aegis of the Department of Science & technology, Govt of Gujarat, in association with Dept of Information and Technology Govt. of Karnataka and Tata Consultancy Services is organizing district and state level Rural IT Quiz among secondary school students in rural areas.

GUJCOST, through its Community Science Center and Science Club Network has successfully organized the district level Rural IT Quiz and selected the rural talents in the state.

At the district level, there are about 75 schools are participating in each districts with 150 teams (2 students in a team), out of which the 10 best teams have been selected for the state level programme.

A total of 990 delegates comprising of 330 teams with 660 students along with their 330 escort teachers and other officials and organizers will attend the programme at KSV, Gandhinagar on 6th September, 2018.

The Rural IT Quiz has been designed on animation based quiz format with three interesting segments including, ByteChain, Retro-Futurist Bytes, Sound Bytes, Byte Network and Accelerator Bytes. The quiz had several interesting elements built into it which prompted students to think laterally. Each of the rounds tested the students’ knowledge in the IT sphere. The unique quiz was conducted by the international brand Quiz Master Mr. Lloyd Saldanha from Bangalore.

The winners at the national competition will be awarded with Rs. 1,00,000/- cash prize along with exciting gadgets. The Rural IT Quiz, which had a successful run in Karnataka for over a decade is now being extended to Gujarat, Orissa, Jammu and Kashmir, Madhya Pradesh, Rajasthan, Andhra Pradesh and all the north eastern states.

The State winners will represent the state in the National Rural IT Quiz finals to be held at Bangalore during November. The winner team along with their escort teacher will be provided air tickets to travel to Bangalore for the attending the final.

iednewsdesk Jan 18, 2022
To quantify these effects, a team of researchers studied archival images captured by the National Science…