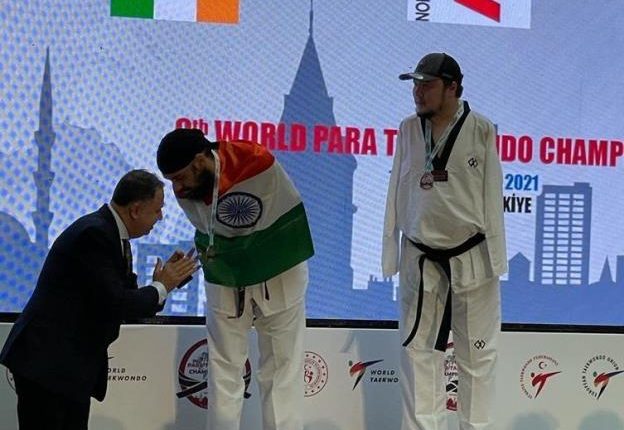 Emerges as ray of hope for differently able persons

SRINAGAR : Being physically challenged can be hurdle for many, but for Chandeep Singh, an International Para Athlete, it is just a part of life which amplified his resolve to represent India at international sports events.

Chandeep recently came to limelight after he made the whole country and particularly J&K proud by winning the silver medal in Men’s plus 80 kg event at the recently concluded 9th Para World Taekwondo Championships held at Istanbul, Turkey from 9th to 12th December 2021.

Hailing from district Jammu of Jammu and Kashmir, Chandeep became the first Para Athlete fromJ&K to achieve such a feat at the World level and this also is India’s first-ever medal in the history of the Para World Taekwondo Championships.

Coming from a modest family, Chandeep’s life faced a u-turn in the year 2011 when he received a life-threatening electric shock of 11,000 volt High Tension line. “When I received this electric shock I got severe burns on my arms and felt that I am about to die”, an emotional Chandeep said.

Though Chandeep survived this life threatening electric shock but the damage of it on his body was devastating as his both arms had to be amputated due to infection in his arms. “Due to this incident I felt devastated and thought that I can’t do anything now in life. But I started to fight back and started doingskating as I was interested in sports from beginning”, Chandeep said.

Before this incident,Chandeep excelled in football, athletics and skating at school, zonal and national levels. But losing his arms didn’t break spirit of this braveheartand days after he was discharged from hospital, Chandeep was back in the sports arena. “After the incident I started to do skating but then I came to know that there are no international events for this sports so I shifted to Taekwondo and made a resolve in my mind that I have to represent my country at international platform in this sport”, Chandeep said.

Apart from sports, the incident also didn’t impact the studies of this fighter and he also excelled in his studies. “After this incident, though it was very challenging for me but I continued my studies and completed my B.E in Electrical Engineering from Mahant Bachittar Singh College Of Engineering And Technology, Jammu”, a satisfied Chandeep said.

Hailing the efforts of J&K Government for upgrading the sports infrastructure here, Chandeep said that the sportspersons should be given scholarships on timely basis and good stipend should also be paid to athletes so that they can continue studies also. He also expressed gratitude to Lieutenant Governor of J&K, Manoj Sinha; his coach AtulPangotra, ADGP, Jammu zone and the management of J&K sports council for their timely support.

Advising the youth and particularly physically challenged people that only way for excelling in sports is dedication, Chandeep remarks that one needs to find his ability and strength to do something. “There are many ways to excel in life and if there is some problem, one needs to find his ability and see how one can grow in his life rather than thinking about one single problem”, Chandeep said with full satisfaction.

In the times of fast pacing world, the remarkable achievements of Chandeep Singh are giving hope to differently able persons, showing them the path of how to excel in life and is an inspiration for one and all.