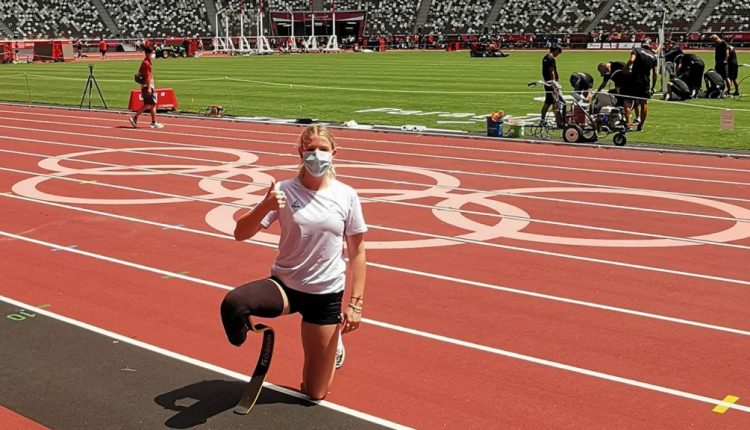 Bachelor of Science student Anna Steven recently made her Paralympic Games debut in Tokyo, competing in the T64 200m and 100m sprints. Anna only began sprinting competitively in late 2016 at 16 years old.

“The highlight of the Games for me was running a new Oceania Area Record and qualifying for the 200m final on my 21st birthday,” she says.

“Being in Tokyo for the Games was such a surreal experience, especially since I started athletics less than 5 years ago. While I was there, I tried to just enjoy the moment. I experienced a full spectrum of emotions, and overall, I’d say it was an awesome opportunity to further my development as an athlete.

“It was only once I got back home to NZ that I had a proper chance to reflect on my Games experience, and everything started to really sink in for me.”

Anna has been named Para-Athlete Sportsperson of the Year at the University of Auckland Blues awards, which recognise students who have achieved in sports.

She’s satisfied with her results in Tokyo and says she’s taken away lots of valuable experience.

“It was actually the first competition I’ve been super nervous about before racing and now that I have an idea of what to expect from a Paralympic Games, I think I’ll be able to perform even better in the next Paralympics in Paris in 2024.”

Anna thought about giving sprinting a go after being inspired by the NZ team competing at the Rio Paralympics and attending a welcome home event for the team.

“Watching the Rio team, especially Liam Malone’s performances, really inspired me to challenge myself and try sprinting. Running on a blade for the first time was such a freeing feeling. I guess I got a bit addicted to it and haven’t looked back since.”

She wants to go further in the sport, with her major competition goals for the next 3 years being the 2022 and 2023 World Championships and the Paris 2024 Paralympics. She says she would like to further improve her Oceania Records and maybe make a podium at these competitions.