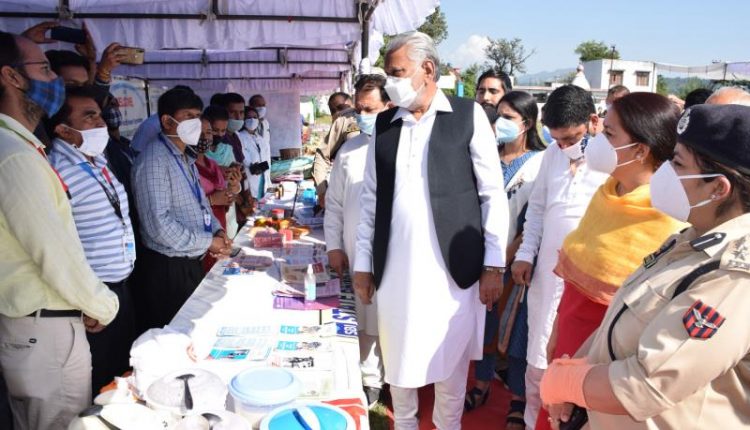 On reaching Jaganoo, the Union Minister interacted with Youth Club members, Panchayat plantation committees, Paani Samitis and SHGs. The Union Minister planted trees in the premises of GHSS Jaganoo. He called upon everyone to contribute more in environmental protection by planting more and more trees in the area.

After inauguration, the Union Minister had a round of departmental stalls established for awareness of general public about the various schemes.

The Minister interacted with staff members and beneficiaries of the scheme and had a detailed review of implementation of schemes on the ground and also took feedback from the beneficiaries.

During the camp, the Minister interacted with PRIs and public delegations who highlighted their grievances and raised several demands before the Minister.

While responding to the demands, the Minister assured that all the demands of the area will be fullfilled on priority basis.

The Minister appreciated the efforts made by District Administration Udhampur for unique initiative and constituting a plantation committee at each Panchayat of District Udhampur. The Union Minister said that Government has empowered PRIs and they are acting as bridge between Government and public and pace of development has increased in all sectors. He added that Prime Minister Narendra Modi has launched PM-KISAN and under this scheme, all small and marginal farmers are provided with income support in three instalments through DBT in their bank accounts.

The Union Minister said that Agriculture and allied sectors are playing a vital role in the development of the country and farming community is the main stake holder in the development of country. He said that to empower the farming community, advanced technology and high quality agriculture inputs are required and the Government is providing Rs 6000 per year to farmers to augment the input cost for high productivity and profitably. He appreciated the efforts of district administration as well as various departments for effective implementation of government schemes on ground.

The Union Minister said that purpose of his visit is to come to assess the progress of implementation of Government schemes on the ground and get feedback from the public. He said that the central Government is committed to the development of Union Territory of J&K. He added that the Ayushman Bharat scheme is the endeavor of the Prime Minister to take care of health of poor people so that no poor should be deprived of medical treatment for lack of financial resources.

The Union Minister also interacted with SHGS and laid stress on milk production and improving the farmer’s economy in a big way. He asked all the stake holders to work out the future course of action for increasing the production of milk to boost the economy of farming community. Union Minister appreciated the wonderful arrangements made by District Administration with chance given to everyone who wanted to put a point across.

iednewsdesk Oct 26, 2021
The main topic of the scientific event was "Health and diseases. The level of scientific knowledge during…