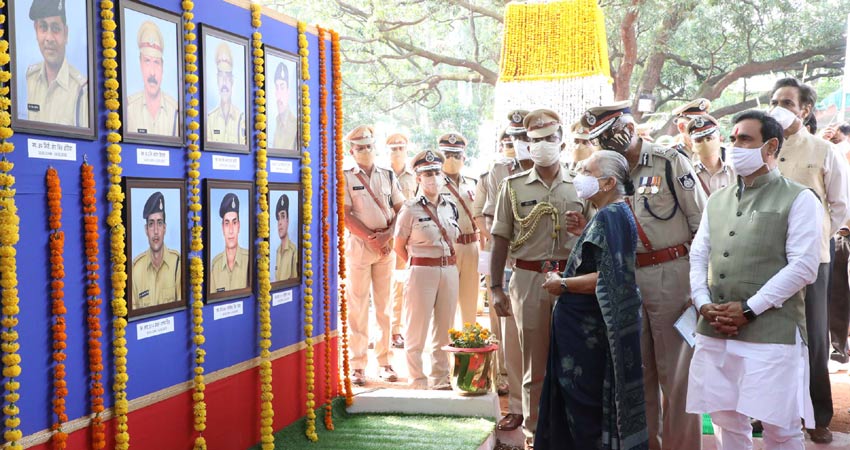 Peace and harmony in society must for development : Governor Smt. Anandiben Patel

Bhopal : Governor Smt. Anandiben Patel has said that only by strengthening the atmosphere of peace, harmony and brotherhood in society can pave the way to development. She said that the police should tackle anti-social elements and anti- national forces with total strictness. Also it should be ensured that common people feel safe. No injustice should be meted out to innocent people. Smt. Patel was addressing a programme organized on Police Memorial Day in the Shaheed Smarak premises at Lal Parade Ground today. She paid tributes to all the martyred police officers and jawans of the country and the state. She assured the families of martyrs that the Madhya Pradesh government, police administration and the entire administration stand with them. Home Minister Dr. Narottam Mishra, Chief Secretary Shri Iqbal Singh Bains, Additional Chief Secretary Home Dr. Rajesh Rajoura were also present in the programme.

Governor Smt. Patel called upon the police force to carry out their duties by taking inspiration from the martyrdom of their immortal martyr comrades. Police is an integral part of society. Only their active participation can lead to development. She said that commendable efforts are being made by the State Police to strengthen law and order system. Improved efforts will have to continue. Prompt investigation of crimes and rise in punishment of criminals has been possible only with activeness of the State Police. It is a matter of pride that Madhya Pradesh Police is counted among the best forces of the country, hence one should always be ready to enhance the identity of the brave police personnel.

Smt. Patel said that the state’s innovation Dial-100 has been adopted by various states of the country. Launching of the pilot project of FIR and making online character verification facility available for the general public is commendable. She congratulated the Madhya Pradesh Police Hawk Force for successfully arresting the Naxalite Badal carrying an award of Rs 8 lakh in Balaghat district. She said that Madhya Pradesh Police has done remarkable work in the elimination of Naxalites and in solving dacoit menace.The state police has done commendable work during the global pandemic of Corona. Decision has been taken by the present government to increase police force, while equipping them with latest weapons and equipment. These efforts must be continued.

The Governor said that it is a matter of pleasure that the family members of personnel are also being given benefits under Police Health Protection Scheme. In view of the constant difficult duties being rendered by the police jawans and officers, the government is fully focused on the well-being and welfare of their families. Praising the peace loving people of the state she said that the disciplined and brotherly conduct of the people has helped in establishing our state’s reputation in the country.

Tributs were paid to the martyrs amidst melodious music based on patriotic songs played by the police band during the programme. At the outset, the pall-bearer party established the honour list at the Memorial fund and a salute was given to the Shaheed Smarak. The parade organized was led by Shri Aditya Mishra, an officer of the Indian Police Service. The parade included women platoon of the Special Armed Forces and Joint Forces of District Forces, Male Platoon of Special Armed Forces, Police Band Platoon and Dog Squad.