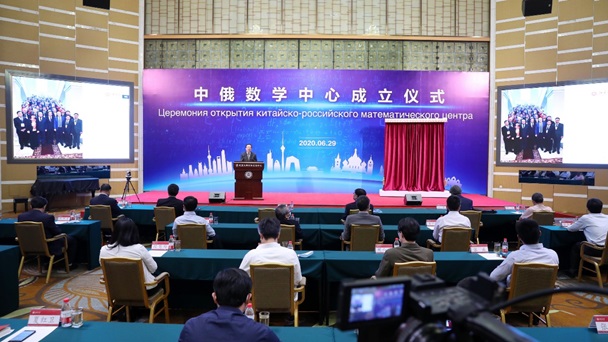 President Hao Ping gave a speech reviewing the long history of friendly exchanges between Chinese and Russian universities, and thanked Moscow State University for the help and support given towards Chinese universities. Hao Ping pointed out that the establishment of a China-Russia mathematics center will enhance cultural exchanges and bilateral cooperation between the two countries. In addition, the center should serve as a training base for outstanding talents from both countries.

Rector Viktor Sadovnichiy congratulated the establishment of the China-Russia Mathematics Center and emphasized Moscow State University’s close ties with Peking University. Over the past 30 years, the two schools have jointly achieved remarkable results through close cooperation. The China-Russia Mathematics Center will serve as a platform to gather outstanding experts and scholars from both countries, train professionals to solve academic problems, and promote the development of scientific knowledge and thinking in both countries. Its establishment marks yet another significant milestone in the cooperation between both schools.

Zhang Jiping, newly appointed director of the China-Russia Mathematical Center said that the center will explore and learn from the successful experiences of Russia when it comes to developing mathematical disciplines and training mathematics talents. He assured that he would do his utmost in uniting math circles in China to join hands with Moscow State University and other leading Chinese and Russian universities, so as to develop the center into a world-class mathematics institution.

The launch ceremony was also attended by other academics, including professors, academicians and heads of mathematics departments from universities and institutions in China and Russia.

Under the Sky: The Class of 2020 joins Peking University Commencement Ceremony online and offline