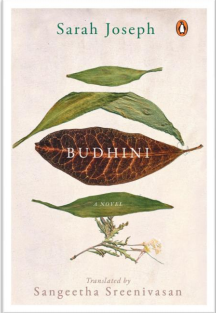 ABOUT THE BOOK: On 6 December 1959, Prime Minister Jawaharlal Nehru went to Jharkhand’s
Dhanbad district to inaugurate the Panchet Dam across the Damodar river. A fifteenyear- old Santal girl
chosen by the Damodar Valley Corporation welcomed him with a garland and placed a tika on his
forehead. When these ceremonial gestures were interpreted as an act of matrimony, the girl was
ostracized by her village and let go from her job as a construction worker. Citing a violation of Santal
traditions, she was outlawed for marrying outside her community. Her name was Budhini. Budhini
Mejhan’s is the tale of an uprooted life, told through the contemporary lens of Rupi Murmu, a young
journalist and a distant relative who is determined to excavate her story. In this reimagined history, Sarah
Joseph evokes Budhini with vigour, authority and panache, conjuring up a robust and endearing feminine
character, reminding us of the lives and stories that should never be forgotten.
Translated by her daughter Sangeetha Sreenivasan, a fiercely individualistic novelist herself, Sarah
Joseph’s Budhini powerfully invokes the wider biopolitics of our relentless modernization and the
dangers of being indifferent to ecological realities.
ABOUT THE AUTHOR: SARAH JOSEPH is a highly acclaimed Malayalam novelist, short-story
writer, political commentator and activist. She is the author of eight novels, nine collections of short
fiction, five novelettes, several plays, children’s literature and several non-fiction books. Her many
awards include the Sahitya Akademi Award, the Kerala Sahitya Akademi Award, the Vayalar Award, the
Crossword Award, the Padmaprabha Literary Award, the O. Chandu Menon Award and the Saraswati
Samman. Her name is inextricably linked with the feminist movement in Kerala, and her radical writings
have inspired and paved the way for future generations of Malayali working women and activists.
ABOUT THE TRANSLATOR: SANGEETHA SREENIVASAN is a bilingual author of several works
of fiction and children’s literature, including Acid, published by Penguin Random House India in 2018. In
addition to her original works, Sreenivasan has translated Elena Ferrante’s The Days of Abandonment
into Malayalam. Her translation of one of Georges Simenon’s Maigret novels is forthcoming from
Mathrubhumi Books. She is currently working on a translation of Chris Kraus’s cult feminist classic I
Love Dick.

INTERNATIONAL student Monish Kumar came to Bond University with a dream – to start his own esports franchise back home in India.