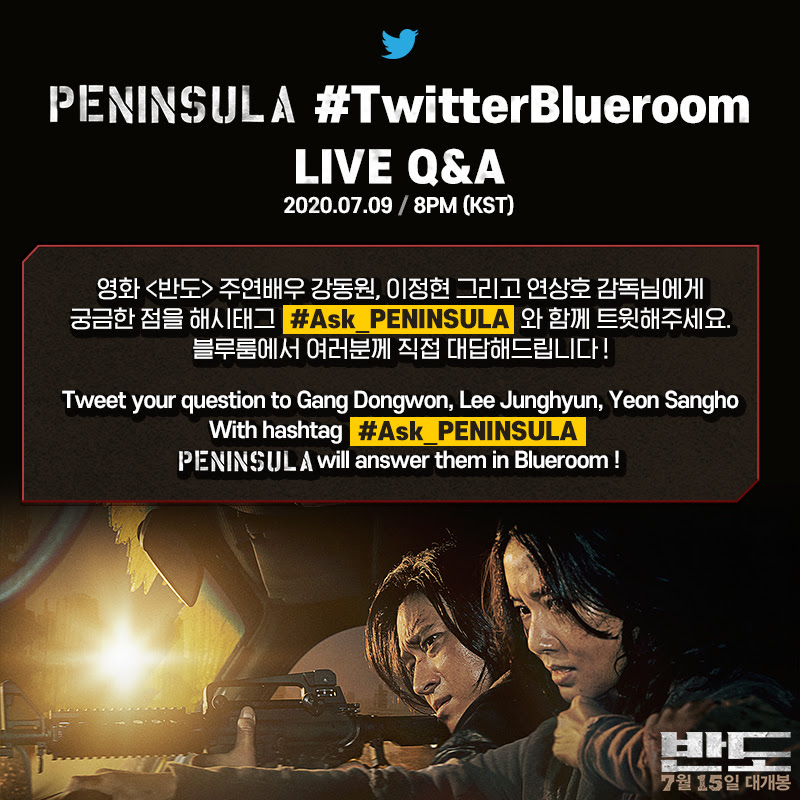 PENINSULA’ will have a ‘TwitterBlueroom LIVE Q&A’ session to interact with global fans on July 9 KST, ahead of its premiere!

Twitter invites the leading actors of the movie <PENINSULA>, Gang Dongwon and  Lee Junghyun, and the director, Yeon Sangho, to  #TwitterBlueroom LIVE Q&A session to communicate with global fans on July 9, ahead of its premiere.

“#TwitterBlueroom LIVE” is an original program of Twitter that invites celebrities from various fields such as K-POP, Entertainment, politics, society, and culture to communicate in real-time with Twitter users around the world globally.

The movie <PENINSULA> is an action blockbuster film depicting the desperate fight by people left behind in the land devastated by a zombie virus for the 4 years after the movie <Train to Busan>.  <Train to Busan> directed by Yeon Sangho, reached over 10 million viewers in Korea and got global attention. Gang Dongwon, Lee Junghyun, Kwon Haehyo, Kim Minjae, Koo Kyohawn, Kim Doyoon, Lee Re, Lee Yewon and other major actors ​​are starring in <PENINSULA>, setting expectations high for this sequel.

Watch the hour-long live stream of #TwitterBlueroom on July 9 at 8 pm KST at the Twitter Korea official account (@TwitterKorea) and Twitter official account of Next Entertainment World (@movie_n_NEW), the film investment and distribution company for <PENINSULA>. Any twitter users will be able to join #TwitterBlueroom through Tweets using the hashtag ‘#Ask_PENINSULA or live streaming chat. Gang Dongwon, Lee Junghyun, and Director Yeon Sangho will introduce the movie and characters, as well as pick and answer the questions from fans on Twitter. English subtitles will be provided to help global movie fans communicate.

Twitter also launched #PENINSULA special emojis to celebrate the confirmation of its release in 185 countries and its invitation to the Cannes International Film Festival. Special emoji will appear on all Tweets using the official hashtags #Ask_PENINSULA, #부산행그후4년, #반도, #TrainToBusanSequel, #PENINSULA. The story behind the special emoji will also be revealed on #TwitterBlueroom.

YeonJeong Kim, Head of Global K-POP & K-Contents Partnership at Twitter said “<PENINSULA> is a masterpiece that has raised expectations for the globalization of Korean movies (K-Movie). #TwitterBlueroom LIVE program has contributed to global communication for K-POP artists such as BLACKPINK, EXO, SuperM, and GOT7 (#JACKmeetsGOT7). Through the global live streaming on #TwitterBlueroom, fans from around the world who are thirsty for the movie will share a new experience in real-time conversation directly with the director and actors of <PENINSULA.>”

<PENINSULA> previously drove a survival challenge, giving away six original items related to the movie, and a global Fan-art challenge in 41 countries across the world as fan promotions. Through this #TwitterBlueroom LIVE session, a post-review about the selected fan-art will also be shared.

<PENINSULA> will be released in Korea, Taiwan and HongKong on July 15, and Malaysia on June 16. It’s officially invited to the Cannes International Film Festival and is regarded as one of the most anticipated films in the second half of this year. In particular, with the global economy slowing down with COVID-19, it has achieved pre-sales in 185 countries around the world, including countries in Europe, North America, South America, Oceania, Middle East and Scandinavia, as well as across Asia.