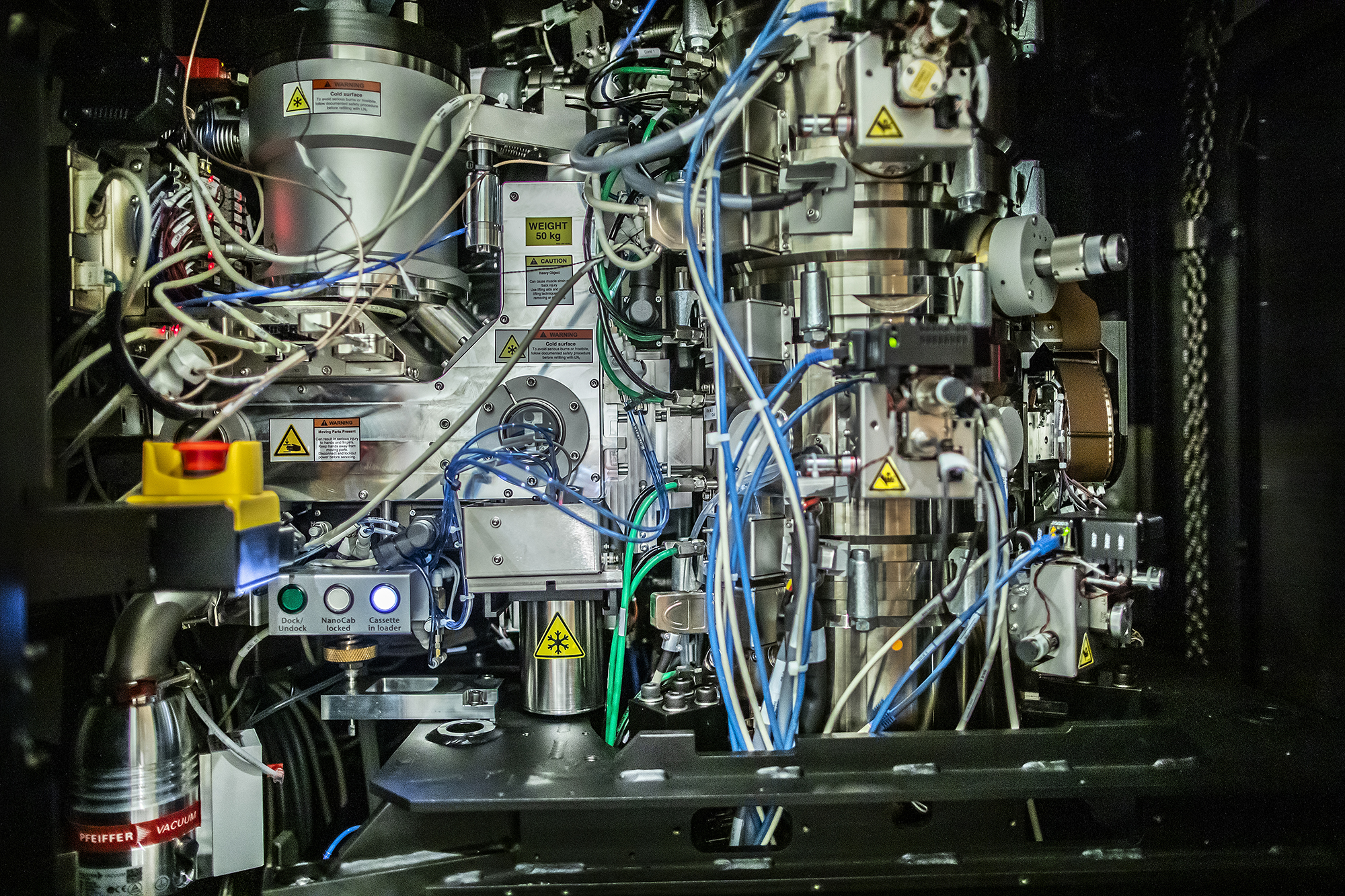 Penn’s Singh Center for Nanotechnology has added the newest cutting-edge technology to its collection of already impressive microscopes: The Krios G3i, a cryogenic electron microscope that will allow researchers to look at cells, proteins, and engineered nanoparticles like never before. The trick is to keep them frozen in time, holding them in their natural environment while bombarding them with ultrafast, ultrahot subatomic particles.

“Cryo-electron microscopy, or cryo-EM, will allow scientists at Penn to understand diseases like cancer, Alzheimer’s, Parkinson’s, and heart and kidney disorders. Biomedical engineers will use cryo-EM to improve nanoparticle technology for drug delivery. Bringing this microscope onto campus is a big deal for everyone,” says Vera Moiseenkova-Bell, associate professor of pharmacology in the Perelman School of Medicine and faculty director of the new Beckman Center for Cryo-Electron Microscopy.

The Arnold and Mabel Beckman Foundation, together with the School of Medicine made this Nobel-winning technology available on Penn’s campus last year, allowing scientists to look at molecules in their natural state at a nearly atomic level.
The ‘cryo revolution’
Moiseenkova-Bell is already seeing firsthand the advantages of using cryo-EM.

TECHNOLOGY DEFINITIONS
A closer look at the different types of imaging methods available
Cryogenic electron microscopy: Electron microscopes (EM) use beams of accelerated electrons, instead of light, as an illumination source, meaning that they have higher resolution and are able to distinguish very small, atomic-level details. In Cryo-EM, a liquified sample is applied onto a grid mesh and flash-frozen in liquid ethane to plunge the sample down to cryogenic temperatures (around −315 °F).

NMR spectroscopy: A technique that studies local magnetic fields around the nuclei of atoms. NMR can help resolve smaller structures in proteins, such as the presence of different functional groups, but larger complexes are not possible to see using this approach.

X-ray crystallography: An approach for determining the atomic and molecular structure of a crystal using X-rays. This method can be used to study both small and large structures, but samples must first be solidified into a highly structured crystal form, an arduous and time-consuming process.

“Getting the structures of biologically important molecules at an atomic resolution is now possible because of the cryo revolution. Compared to other techniques, this is so fast. Crystallography can take sometimes over a year to get one structure. Cryo-EM allows you to get a structure in days.”

“With NMR we can only get a small number of protein structures due to the size limitation, and with crystallography you need a well-ordered crystal to get only one structure [of the molecule]. With cryo-EM, you could visualize pretty much everything that is bigger than hemoglobin without needing to crystalize and solve many structures at a time,” Moiseenkova-Bell says.

An added benefit of cryo-EM is that it allows scientists to look at structures in their natural state without crystallizing or dehydrating them. While crystallization requires scientists to take proteins and unnaturally force their atoms into a perfect crystal lattice before imaging, cryo-EM presses pause on a cell’s natural processes, allowing researchers to look at where proteins are and more accurately infer how they work.

“Because the proteins get flash frozen in liquid ethane, we are able to trap them in their natural conformations. That’s another benefit of cryo: The proteins, or cells, are in their native environment which is impossible in other techniques,” says Moiseenkova-Bell.

How to freeze time
The “cryo” and the “EM” portions of the microscope are actually separate processes. What allows cryo-EM to capture a sample in its native state is the “cryo” freezing that takes place when researchers are preparing a sample. Samples are plunged into liquid ethane at temperatures below -315°F, seven times colder than the average temperature of the North Pole during winter, instantly freezing them solid. This process is known as vitrification: Unlike normal freezing, which might form ice crystals that could hinder the imaging, the liquid ethane fixes the sample in a glass-like block that preserves its structure.