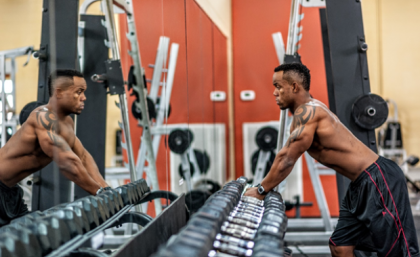 Research from The University of Queensland has found people lifting weights for aesthetic reasons run the risk of developing muscle dysmorphia.

Also called ‘reverse anorexia’ or ‘bigorexia’, muscle dysmorphia is characterised by obsessive thoughts, compulsive behaviours and body image distortion, with sufferers seeing themselves as smaller than they are.

UQ Anthropologist Dr Mair Underwood teamed up with renowned Harvard expert Roberto Olivardia in the first study to include an insider’s perspective on the disorder.

Dr Underwood said muscle dysmorphia was first identified in bodybuilders, the people who are also most likely to suffer from it.

“Bodybuilding is a risk environment for mental health, and with so many young people building their bodies to look good, the dangers of developing muscle dysmorphia can’t be ignored,” she said.

The pathological preoccupation with muscularity and ‘being big’ can cause great mental distress and many sufferers attempt suicide.

While some women have been found to suffer from muscle dysmorphia, men are especially at risk.

The study found all men who immerse themselves in bodybuilding practice describe themselves as having some degree of muscle dysmorphia.

“A common sentiment among bodybuilders is ‘the day you start lifting is the day you become forever small’,” Dr Underwood said.

The study found some bodybuilders try to manage the disorder by weighing and measuring themselves, taking photographs and asking others for feedback.

“Unfortunately, these ‘management strategies’ are actually all symptoms of muscle dysmorphia, so it is vital people get guidance to develop strategies that will help them, instead of making the disorder worse,” Dr Underwood said.

Funded by a UQ Early Career Researcher Grant, the study was conducted over the last four years in online communities frequented by bodybuilders who use image and performance enhancing drugs.

“Unfortunately, we don’t know what ‘healthy’ or ‘normal’ bodybuilding is and how it differs from psychopathological bodybuilding,” Dr Underwood said.

“We don’t know what causes people to become obsessive about their size or even how to help them.

“But by collaborating with bodybuilding communities, we can develop ways to help sufferers manage their disorder and prevent people developing it in the first place.”

This study was published in the journal Health: An Interdisciplinary Journal for the Social Study of Health, Illness and Medicine (DOI: https://journals.sagepub.com/doi/10.1177/13634593221093494)

Pfizer: Valneva and Pfizer Enter into an Equity Subscription Agreement and Update…