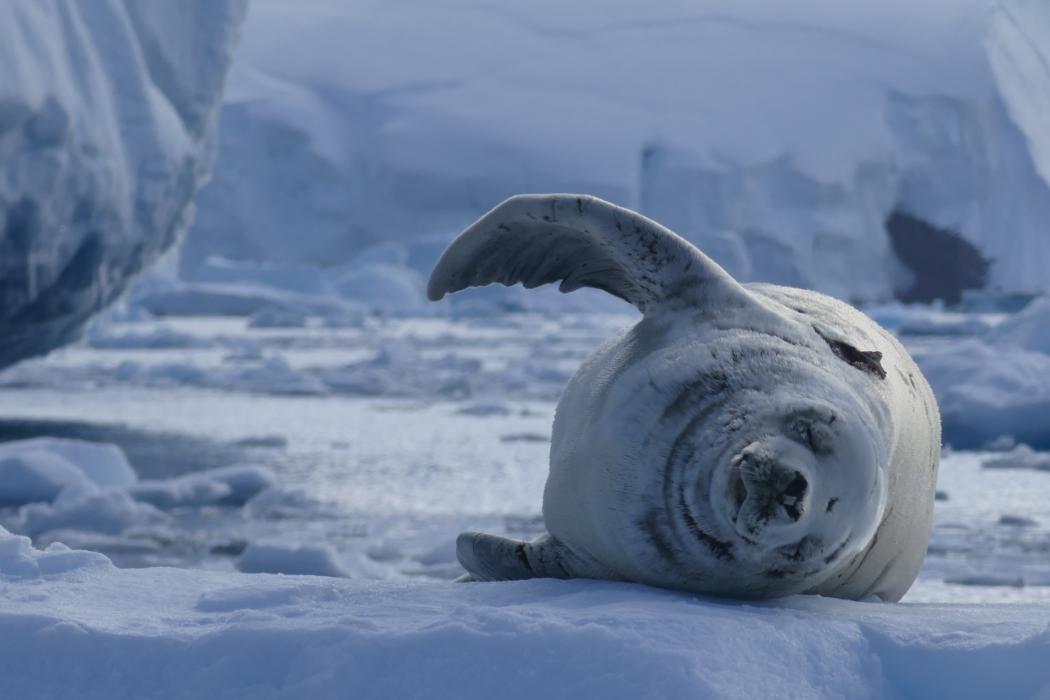 With funding from The Pew Charitable Trusts, University of Canterbury (UC) scientists have been using satellite images of Antarctica and the power of citizen science to uncover the secret lives of crabeater seals in the largest ever survey of the Weddell Sea – one of Earth’s last wildernesses.

“We searched satellite photos for crabeater seals in the Weddell Sea, with help from over 2000 volunteers around the world covering an area of sea ice the size of Fiji,” says UC Gateway Antarctica scientist Dr Michelle LaRue, a lecturer of Antarctic Marine Science in UC’s School of Earth and Environment | Te Kura Aronukurangi.

This is the largest survey of sea ice in the Weddell Sea and the most broadly distributed study on crabeater seals in a single year. Working with Dr LaRue, lead author Dr Mia Wege, a post-doctoral researcher from UC Science’s School of Earth and Environment, now at the University of Pretoria, is a marine predator ecologist with a specific interest in seals and Antarctica.

“I study their behaviour, foraging ecology, diet, abundance and distribution. But really, seals are just the means to understand impacts of climate change on species living in extreme environments. We combined Google Earth-like imagery, volunteers and statistical modelling to figure out where crabeater seals are likely to be found in the Weddell Sea – a place that is likely refugia for ice-dependent species, as the climate continues to change,” Dr Wege says.

“We found that crabeater seal distribution overlapped mostly with Antarctic krill habitat. This is important because Antarctic krill is not only preferred prey for these seals, but also the vast majority of Antarctic predators. Krill are also a target species for fisheries in the Southern Ocean. Knowing crabeater seal distribution is valuable conservation information, particularly because a Marine Protected Area is currently being planned in the Weddell Sea.”

Global leaders will consider protecting over 2.2 million square kilometers of the Weddell Sea this October when the Commission for the Conservation of Antarctic Marine Living Resources annual meeting takes place.

Some areas had never been surveyed for seals before, due to the thick, multi-year pack-ice that precludes ship-based surveys in the Weddell Sea.

“Drs LaRue and Wege are world-class Antarctic researchers, and working with volunteers means that people without typical scientific training get to be directly involved in the scientific process,” says Dr Salas. “We expect this research to significantly help shape the conversation about where and how to best protect the Weddell Sea ecosystem.”

“Citizen science means anyone in the world with an internet connection can do research alongside us by reviewing the satellite images and telling us what they see,” says Dr LaRue. This method has been successfully used to find Weddell seals in Antarctic fast-ice, another project led by Dr LaRue.

“But now, as a pilot study, we searched for crabeater seals in the pack-ice,” she says. Pack-ice (ice floating in the middle of the Southern Ocean) is more jagged, with ridges and shadows (due to freezing and thawing of ice) which makes finding seals in the satellite images much harder.

This study, along with other work by Dr LaRue at UC, suggests that using satellite photos to study Antarctic predators could become a valuable and cost-effective long-term monitoring method in a place that is hard to reach most of the year – now made even more inaccessible by Covid-19 restrictions.

Most people don’t know that humans fish for, and consume, krill, she says. The shrimp-like crustaceans that whales, penguins and crabeater seals eat can be found in krill oil supplements, for example.

“So since we effectively are competing with these animals for their food, we have an obligation to ensure we don’t damage the ecosystem,” Dr LaRue says.

“And one way to keep track of how the system is functioning is to study krill predators, like crabeater seals. Since we found very few locations with seals across a huge space in the Weddell Sea, creating a marine protected area may be a prudent action, to set aside the region from irreversible ecosystem damage.”

Tweets and web data help track languages around the globe