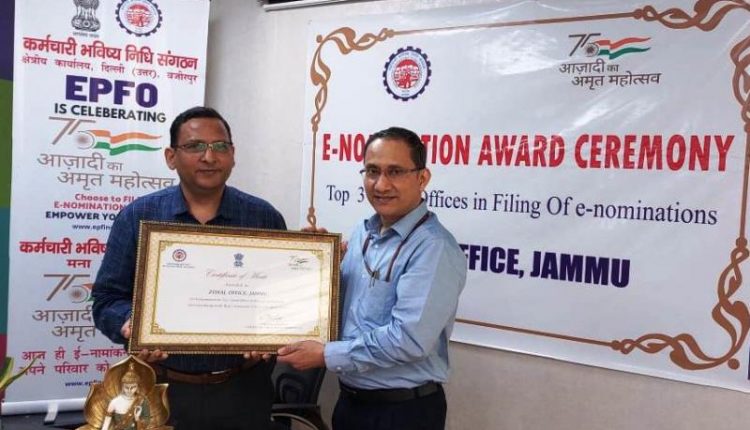 JAMMU : EPFO Zonal office Jammu & Kashmir and Ladakh has been acknowledged and felicitated (virtually though ZO, J&K and Ladakh-located at New Delhi) in a programme organised by EPFO during 230th meeting of the Central Board of Trustees, EPF held today in Guwahati, Assam.

The meeting commenced in the august presence of Chief Minister of Assam, Himanta Biswa Sarma.

Zonal Office, Jammu was felicitated for achieving 2nd position at all India level in the field of e-Nomination through virtual mode.

Rizwan Uddin, Regional Provident Fund Commissioner – I who is currently looking after the work of all the three Offices of EPFO, in Jammu, Kashmir and Ladakh was invited to join the felicitation at Zonal Office located in Delhi.

The multi-pronged strategy for the e-Nomination drive consisted of holding regular contact programmes by Regional Commissioner Rizwan Uddin, who conducted multiple sessions on e-Nomination in various establishments of Jammu and even in the remote and difficult areas of Kashmir and Ladakh.

Apart from this, regular follow-ups were taken with establishments through webinars and providing them updated list of pending e-Nominations through customized emails by utilization of technology.Wide publicity was also provided to the e-Nomination drive with the help of media platforms through multiple channels including print, FM and Social Media.

The Jammu & Kashmir and Ladakh zone was able to achieve this remarkable feat by cooperation of all its stakeholders and relentless efforts put in by a small team of officers headed by Shri Rizwan Uddin (Regional PF Commissioner – I). Ajit Kumar Mishra, RPFC-II, though occupied in accounts related work also mobilized the process.

Bipin Kumar (Accounts Officer), Ankur Janghu (Enforcement Officer) and Suhail Khan (Accounts Officer), Promod Singh, EO and Jagpreet Cheema, AO also contributed towards achieving the goals set by the Head Office which resulted in exceeding the set target by large margin specially by the Regional Office Kashmir which did exceptionally well and stood ahead of Jammu in terms of percentage of e-nominations completed and stood at 7th place at all India level in spite of poor weather conditions and slow internet speed Kashmir Valley.

NUS research shows CO2 could be stored below ocean floor