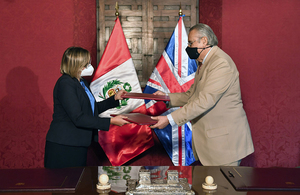 Lima: The Government of the Republic of Peru and the Government of the United Kingdom of Great Britain and Northern Ireland signed the Memorandum of Understanding for the renewal of the Infrastructure Task Force, which extends the mandate of the Task Force, ensuring the continuation of the cooperation between Peru and the United Kingdom in infrastructure matters.

This memorandum was signed by the Foreign Affairs Minister for Peru, Allan Wagner Tizon, on behalf of the Peruvian government, and by Kate Harrisson, British Ambassador to Peru. The signing took place during the opening session of the fourth Joint Infrastructure Taskforce between Peru and the United Kingdom which took place today.

It should be remembered that the first Memorandum of Understanding was signed in September of 2018. This Infrastructure Task Force has the purpose of sharing experience, expertise and best practices in the prioritisation, financing, procurement and management of infrastructure projects.

We are very proud of the joint work done. Peru is an important partner and ally of the United Kingdom, and we will continue to work together to contribute to the country’s growth and development, both in infrastructure and in other fields.

In turn, the Vice Minister of Economy of Peru, Brigitt Bencich, highlighted:

The Infrastructure Task Force between Peru and the United Kingdom completes the efforts made by the Government of Peru in order to boost the infrastructure development, either through Public Private Associations, traditional public work or Government to Government mechanism.

The agenda in this meeting included the presentation of the progress made since the creation of the Task Force. Along those lines, the progress made in the NIPC was reported, published in July 2019, in which it prioritises de development of 52 projects of high social and economic impact at national level. Likewise, the work made to improve the planning and delivery in infrastructure through the UK’s Infrastructure and Projects Authority and the Centre for Digital Built Britain was highlighted.

To date, more than 200 Peruvian officials from 10 government institutions have been trained in UK methodologies, such as, internationally certified Five Case Model and Project Development Routemap, ensuring infrastructure projects delivery. Members of the Task Force committed to ensuring that the capacity developed and lessons learned through the cooperation are directed to address infrastructure gaps in the health and education sectors, especially in the wake of the weaknesses exposed and exacerbated by the COVID-19 pandemic.

Likewise, it was highlighted that the acceleration in green infrastructure projects is an important axis to achieve sustainable development, meet climate action objectives and attract international financing.

Furthermore, the British delegation congratulated Peru for its progress in implementing the BIM model in the country’s public investment scheme. They indicated that this will support transparency and competitiveness in Peru’s infrastructure sector, bringing it into line with international standards and laying the foundations for the digital transformation in the country. The members of the Task Force also highlighted the importance for investors to know a predictable pipeline of investments with transparent and evidence-based criteria.

Finally, it was mentioned that the cooperation between Peru and the UK has allowed both countries to support and develop the Government to Government (G2G) agreement model to enable knowledge transfer through the process of delivering major infrastructure projects. The development of systemic capability has been and will continue to be at the heart of the UK’s support for both the Lima 2019 Panamerican and Para Panamerican Games and the Reconstruction Programme, ensuring that UK collaboration leaves a lasting legacy supporting the development of a wider range of infrastructure projects in Peru.