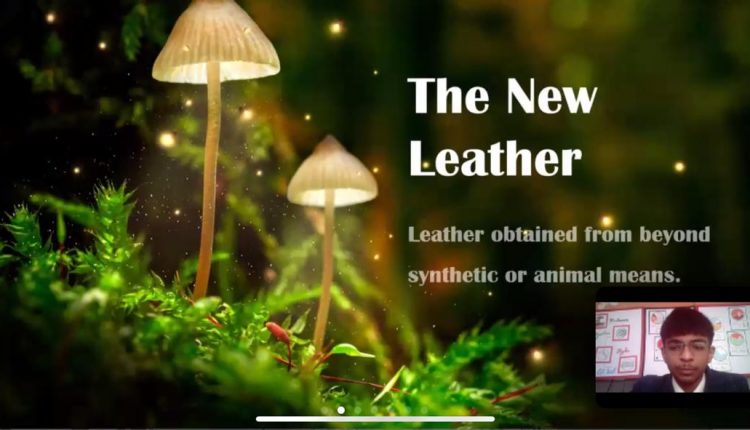 New Delhi: Devesh Kumar, a student of class 10th from Modern Public School, Shalimar Bagh, New Delhi, has recently been bestowed with the Compassionate Kid Award by the American Animal Rights organization, PETA (People for Ethical Treatment of Animals). He has received this prestigious award for his project “The New Leather”, which proposes making leather from Mycelium.

Prior to this, he had made his alma mater proud by bagging the third position at the Delhi State Level Children Science Congress 2020 for the same project. The competition was organized virtually on 20th February 2021 and was adjudged by a panel of eminent scientists from the Department of Science and Technology, Government of India.

National Children’s Science Congress is the flagship program of the National Council for Science and Technology Communication (NCSTC), Department of Science & Technology (DST), Government of India. The program offers children a platform to conduct research work at a micro-level and promotes creativity and critical thinking among the students.

Devesh had been deeply concerned by the ruthless killing of animals for the production of leather, and it motivated him to find an alternative. He focused not only on minimizing the killing of animals but also on making leather production more sustainable, which would result in the betterment of the environment as well. His idea revolved around making leather from Mycelium, which is the vegetative part of a fungus or fungus-like bacterial colony.

“According to the United Nations Food and Agriculture Organization, the leather industry is responsible for about 14% of all greenhouse emissions from human activity. Cattle rearing, by itself, is responsible for 65% of those emissions. This industry can be sustained to a large extent by the use of Mycelium. It would help to reduce the killing of animals to a large extent, minimize the pollution, and help reduce greenhouse emissions,” Devesh had stated during his presentation of the concept.

Devesh was able to develop this idea to the level of execution under the mentorship of his guide teacher Ms. Naina Nagpal, who helped him every step of the way during project development.

Talking about the incredible achievement, Mrs. Alka Kapur, Principal, Modern Public School, said, “At MPS, we have always focused on sustainability and we leave no stone unturned to inculcate this spirit among our students. It lifts the heart to see a student of ours being honored by such a globally renowned organization like PETA, which has been a force for good in this world. I am extremely proud of him and wish him all the best for his future endeavors.”