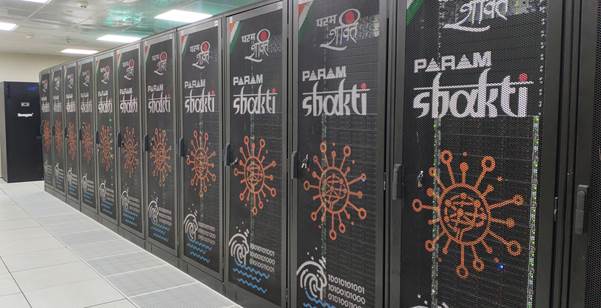 A Memorandum of Understanding (MoU) was signed between IIT Kharagpur and Centre for Development in Advanced Computing (CDAC) in March 2019 to establish this state-of the art Supercomputing Facility with 17680 CPU cores along with 44 GPUs. This facility has pioneered in using RDHX based efficient cooling system to obtain a high power usage effectiveness. This system has been tested extensively by both IIT Kharagpur and CDAC for commercial, open-source and in-house software pertaining to diversified applications.

IIT Kharagpur has been following the mandate of NSM towards development of computationally efficient software for supercomputing platforms and applications for large-scale industrial and scientific problems. IIT Kharagpur is also one of the NSM nodal centres for training in HPC and AI and working on development manpower required for the Supercomputing Research across the nation. This centre has been organizing courses, workshops, bootcamps etc. in various domains pertaining to fundamentals of supercomputing and data sciences and their application to diversified fields including Agriculture, Astronomy, Biology, Mechanical Engineering, Material Sciences etc. IIT Kharagpur has also established the Centre for Computational and Data Science with a mandate to train the researchers in Supercomputer accelerated R&D. The new high-performance computational facility would aid researchers to solve large-scale problems of different fields of Science and Engineering. Some of the identified focus areas in which this supercomputing based research will be of great value addition are: Computational Fluid Dynamics, Artificial Intelligence, Big Data Analytics, Climate Change & Digital Earth, Computational Biology, Cryptography & Security, Smart Infrastructure & Sustainable Cities, Smart Materials etc. Furthermore, NSM has sponsored a number of application research projects using this Supercomputing facility involving researchers for IIT Kharagpur and other Indian institutes and industries. Overall, this Supercomputing facility will provide a major boost to the research and development initiatives in Indian academia and industries to reach a position of global esteem.