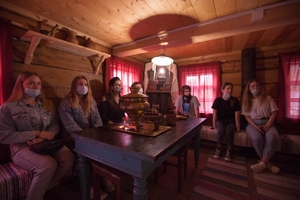 The days off, timed to the celebration of the Day of Russia, for some of the students of Petrozavodsk State University passed under the sign of acquaintance with the history of the indigenous peoples of the republic.
A group of students and teachers of the Department of Baltic-Finnish Philology of PetrSU, who became participants in the project “KARELIANA: a journey across the land of the Karelians”, on June 13 got acquainted with the history, traditions and customs of one of the peoples of Karelia – the Vepsians, visiting the ancient Vepsian settlement Sheltozero, located in the Prionezhsky region of the Republic Karelia.
The Sheltozero Vepsian Ethnographic Museum named after V.I. R. P. Lonina (branch of the National Museum of the Republic of Kazakhstan). The participants had a tour of the museum, which is located in a traditional Vepsian house built in the middle of the 19th century. merchant Melkin. The curator of the museum funds V. Ukhanova introduced the guests to the exposition and objects. In addition to getting acquainted with the museum exhibits, the history of the founding of the museum itself, the participants learned about the current state of the Vepsian language in the village and its environs, the peculiarities of its teaching in local schools and kindergartens.

I was surprised that thanks to the initiative inhabitants of the village of Sheltozero, the house was preserved at the place where it was built, as well as the collected collection of museum exhibits. It seems to me that today it is important to preserve history, cultural heritage, as well as the Vepsian language. And this can be done through educational programs in schools and kindergartens, visiting similar museum exhibitions and master classes,

– said the participant of the trip Roman.

In addition, all guests of the Sheltozero Museum were able to immerse themselves in Vepsian culture through participation in traditional Vepsian games and excursions around Sheltozero.

The project “KARELIANA: a journey across the land of the Karelians” is being implemented by the KROO “Club of Youth Projects and Initiatives” with the support of the Presidential Grants Fund.