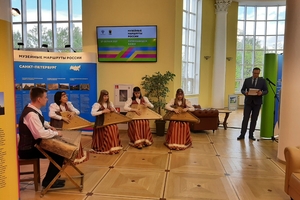 PetrSU at the forum “Museum Routes of Russia”

Representatives of the Department of Tourism of the Institute of Physical Culture, Sports and Tourism of PetrSU took part in the forum “Museum Routes of Russia”, which took place in the National Library of the Republic of Karelia.
The event of the Ministry of Culture of the Russian Federation was aimed at the development and promotion of museums in the North-West Federal District. The opening of an exhibition project representing the museum resources of the Northwestern Federal District took place.

During the forum, a design and analytical session was held on promoting museums and museums of reserves in order to generate demand for them in the Northwestern Federal District. The solemn signing of agreements on cooperation between museums took place.

Presentations of regional museums of Karelia were presented.

University of Bristol: Smoking during pregnancy may not…

During the break, we managed to communicate and discuss the possibilities of cooperation of the Department of Tourism with the museums of Olonets, Sheltozer, Kondopoga. The head of the branch “National Museum of the Republic of Kazakhstan” in Belomorsk invited the students to come on an excursion to a unique museum in the republic.

PetrSU students are invited to practice and later to work in museums of Karelia, as PetrSU actively participates in volunteer work and creative projects (for example, with the Museum of Fine Arts and the visit center of the Vodlozersky National Park).

The program of events was full of useful information, meetings and a desire to further improve the professional level in the field of museum affairs and actively cooperate not only with the museums of the city of Petrozavodsk, but also with remote museums,noted the participants of the event.

A new master’s program opens at the IEP

Cooperation with the sister city of Tubingen

iednewsdesk Apr 7, 2022
Thirsty eight subjects on offer at the University feature in the QS World University Rankings by Subject 2022,…