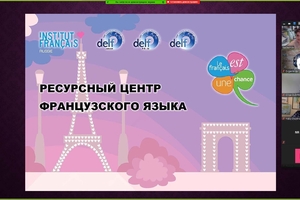 N.S. Barymova took part in the All-Russian meeting of the heads of the DELF examination centers, organized by the French Embassy in Moscow.
In the Russian Federation, 48 examination centers have been created to obtain an international DELF diploma in French. Among the participants in the meeting were experts from France Education International , which is the operator of the French Ministry of National Education, one of whose functions is to support the spread of the French language in the world by training teachers and educational institutions and issuing certificates in French.

During the online meeting, the real state of affairs of the examination centers in the world and in Russia in particular was discussed, as well as the experts shared the technologies of popularizing the French language and international exams.

Head of the French language resource center at PetrSU N.S. Barymova made a report in which she spoke about the activities of the center at PetrSU, in particular, about the project “Week-end in French”, which aroused great interest from the participants.

Representatives of the Russian Defense Ministry met with graduates of PetrSU