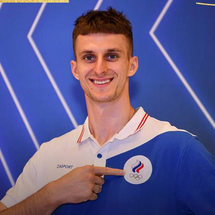 Vladislav Larin is the new Olympic champion of our country, Honored Master of Sports of Russia in taekwondo, world champion in 2019. While still a student at the Institute of Physical Culture, Sports and Tourism of PetrSU, he received a ticket to the Tokyo Olympics. Now a PetrSU graduate Larin Vladislav is a three-time European taekwondo champion, a member of the Russian national taekwondo team, at the highest Olympic level he represented his native university, and the Republic of Karelia and Russia as a whole at the Summer Olympics in Tokyo.

Vladislav Larin defeated Macedonian Dejan Georgievski in the final of the tournament in the category over 80 kg. with a score of 15: 9. The gold medal of a Petrozavodsk University graduate became the seventh for Russia at the Games in Japan and the second in taekwondo both at these competitions and in the history of the Olympics.