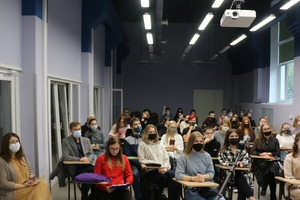 PetrSU is one of the sites of the competition “No statute of limitations. Minute of silence”

The All-Russian competition among students-architects and young specialists-architects “Without a statute of limitations. A minute of silence”, organized by the All-Russian public movement “Search Movement of Russia” and the Moscow Architectural Institute, started in the year of the 80th anniversary of the beginning of the Great Patriotic War.
As a result, the participants present their projects to create memorable signs and memorials dedicated to the tragic pages of the country’s military history. The operator of the competition is ANO “Art Formula”. The final exhibition will take place in November in Moscow.

The organizers of the competition believe that the importance of preserving the historical memory of the Great Patriotic War is increasing every year, because there are fewer and fewer veterans, living witnesses of the war. Thanks to architecture, the historical codes of states, examples of the heroism of its people, have been preserved for centuries.

Within the framework of the competition at PetrSU in the format of online hearings, the defense of student projects of historical memorials in the territory of the Pskov region and in Karelia during the Great Patriotic War took place. The projects of the monuments were created within the framework of the architectural competition “No statute of limitations. A minute of silence”.

At the hearings, projects of monuments dedicated to the events of the Second World War in Karelia were also presented. About the option of commemorative decoration of the territory at the intersection of st. Profsoyuznaya and st. Vostochnaya in the Zheleznodorozhny district on the site of the former concentration camp No. 5 in Petrozavodsk, said Alexandra Kosykh from Petrozavodsk State University.

Hearings in offline or online format are a mandatory stage of the architectural competition for students and young professionals “No statute of limitations. Minute of silence”. In the process of their holding, the leaders of the competition will be identified, but the jury will make the final decision on who will win.

Exhibition “From Components to Artificial Intelligence”

Seminar “The experience of wooden housing construction: past and present”