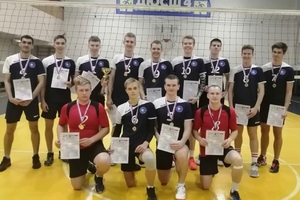 PetrSU men’s volleyball team is the champion of Karelia

The PetrSU team became the owner of the Karelia Cup for the next year.
The Republic of Karelia Cup was held without spectators. 4 teams fought for the right to be called the strongest team.

MIT welcomes Virginia Rometty as its next Visiting…

Under the guidance of the national team coach Vladimir Gennadievich Dementyev, the men’s national team of PetrSU won all the matches and became the owner of the Cup of Karelia for the next year.

Congratulations to the national team and coach on a successful start to the season.

PetrSU students at the All-Russian meeting of rescue students

For Trud.com, the academic year began with achievements

MIT welcomes Virginia Rometty as its next Visiting Innovation Fellow