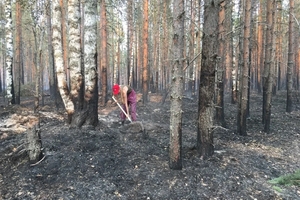 Maria Martyanova, a student at the Institute of Foreign Languages, became a member of the volunteer team that extinguished forest fires in the area between the village of Ruga and the village of Kudama, as well as in the village of Nelgomozero.
I am a member of the “ONF Youth” team, with which we traveled to the village of Kudama. We only needed to control a certain section of the road, which had already been extinguished by firefighters, to extinguish the smoke rising from the ground. The forest itself was already extinguished, but the moss was still smoldering below, which was a big problem, since it could ignite at any moment. Our task was precisely to prevent this by eliminating any signs of an impending fire. Combustion sites were eliminated with sand and water. The main task of the team is to prevent the forest from catching fire along the road and to keep the fire out of the settlements.

We were also engaged in extinguishing in Nelgomozero. Literally a day before we arrived, a strong fire broke out there. Fortunately, it was extinguished. Volunteers are instructed and we are not allowed to approach the fire.

The main difficulty was that it was hot and difficult to breathe due to the smoke. Fortunately, we had respirators, which were very saving,

– the student shared her impressions.

Answering a question about how her parents reacted to her decision to help firefighters extinguish forest fires, Maria said:

My parents supported my desire, and even for my birthday, the day before leaving, they gave me a shovel. Overall, I am very pleased that I went as it is an incredible experience of working in a great team and an opportunity to help nature.

By the way, the “ONF Youth” team, of which Maria Martyanova has been a member for 3 months, has been working for 3 years throughout Russia and in the Republic of Karelia, in particular:

We are more than 72 thousand throughout the country. Working in emergency areas is one of the directions of the team. Within the framework of a cooperation agreement with the Russian Emergencies Ministry, members of the ONF Youth team are trained as public rescuers. Upon completion of the course, volunteers acquire basic skills in emergency areas. This year, the team helped to cope with the aftermath of the floods in Crimea, the Amur Region and the Trans-Baikal Territory.

Let us remind you that in the space “Boiling Point” a single Center for volunteer assistance to firefighters of the republic is based.

Anyone can leave an application and become a volunteer – the center will create a base of volunteers who are ready to help locally, systematically organize their work, and distribute resources in cooperation with the Ministry of Emergencies and district administrations.

The Center will also accept foodstuffs, essential goods, tools for extinguishing fires. They will be handed over to firefighters, volunteers and local residents. Acceptance of equipment and assistance is carried out from 9:00 to 18:00.

PetrSU is a participant in the wastewater treatment project