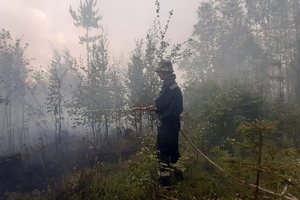 Dmitry Skoropadsky, a student at the Institute of Forestry, Mining and Construction Sciences of PetrSU, became a member of the volunteer team that exterminated forest fires in the Pryazhinsky District.
Karelia is engulfed in forest fires. In this difficult period for the republic, many of its inhabitants do not stand aside, but are actively involved in the fight against the natural disaster.

For example, Dmitry Skoropadsky, a student of the Institute of State Humanities and Information Technologies, became a member of a volunteer team consisting of representatives of the search squad “In the footsteps of the dead planes” of the Union of Search Units of Karelia, which extinguished forest fires in the Pryazhinsky region.

For several days, volunteers prevented the spread of the fire by flooding it with water from pull-up fire hoses and firemen’s backpacks, filling it with sand. Mostly it was manual work in extreme conditions of smoke and high temperatures.

The team completed the task assigned to it and did not allow the fire to go beyond the designated square. But the situation in Karelia as a whole is still tense, so there remains a need to mobilize all available resources in order to defend our forests and secure settlements,

Let us remind you that in the space “Boiling Point” a single Center for volunteer assistance to firefighters of the republic is based.

Anyone can leave an application and become a volunteer – the center will create a base of volunteers who are ready to help locally, systematically organize their work, and distribute resources in cooperation with the Ministry of Emergencies and district administrations.

The Center will also accept foodstuffs, essential goods, tools for extinguishing fires. They will be handed over to firefighters, volunteers and local residents. Acceptance of equipment and assistance is carried out from 9:00 to 18:00.

PetrSU at the project and educational intensive “Archipelago 2121”

$7.85 million to bring high-speed Internet access to more than 1,550 households in the Lanaudière and Laurentides regions by September 2022