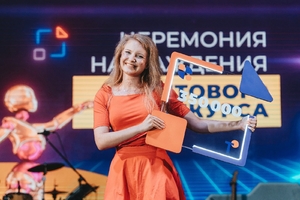 In Crimea, the results of the All-Russian competition of youth projects were summed up as part of the educational ride “Street as a new stage” of the art cluster “Tavrida”. The check-in united art schools of street theater, circus art and art songs. Among the winners – Alexandra Buryanina, a 5th year student of the Institute of Foreign Languages ​​of PetrSU.
Alexandra Buryanina presented the project “Festival of amateur student and youth theaters“ T-ART ”- 6” and won 350,000 rubles for its implementation.

For the fifth year I have been going to the theater studio of PetrSU “Bolshoi Experimental Student Theater” (“BEST”), the head of which is Associate Professor of the Department of English, Ph.D. Shablikova Nadezhda Petrovna.

To replace the “Street as a New Stage” of the All-Russian Forum of Young Workers of Culture and Arts “Tavrida” I came as an actress of the student theater. In Taurida, young creators are given the opportunity to attend lectures and trainings from leading experts from their creative field, as well as swim in the warm sea and bask in the gentle sun, communicate with people who are also in love with art and generally enjoy their stay in the warm and hospitable Crimea.

However, I came to win a grant, with the help of which our theater studio will hold a theater festival for amateur groups in the North-West of Russia “T-ART”. The goal has been achieved – the grant has been received, now we need to prepare, because we plan to meet guests not only from Petrozavodsk, but also from Sortaval, St. Petersburg, Kaliningrad, Arkhangelsk, Murmansk (and other cities). The festival will take place in April, and our participants will have a rich four-day program with performances screening, their subsequent analysis by professional directors, acting master classes from teachers from Moscow and St. Petersburg, as well as excursions, theater trips and communication!

We are already looking forward to our participants and invite everyone to watch their performances, shared Alexandra.