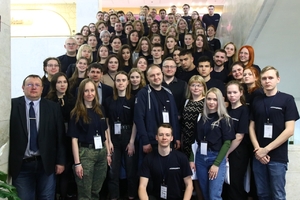 As part of the educational program of the rally, researchers, heads of archives, representatives of international media groups spoke to the students about the history of the emergence and the main directions of the project “No statute of limitations”, as well as the results that have been achieved so far. As part of the cultural program, the rally participants attended the performance “Laurel” at the Moscow Art Theater. Gorky and the updated exposition “The Feat of the People” in the Museum of Victory on Poklonnaya Gora.