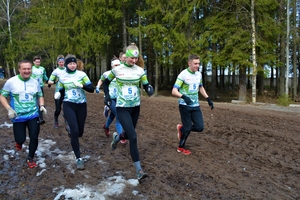 The Republican festival “TRP Race” was held at Kurgan, in which the students of PetrSU also took part.
The festival was timed to coincide with the 90th anniversary of the All-Union TRP complex and was held with the aim of attracting residents of the republic to systematic physical education and sports, popularization of the TRP complex and the development of student sports.

Every year this event brings together sports lovers who create teams and test themselves for strength. This time, 31 teams decided to pass the sport tests “TRP Race”. These are representatives of educational institutions, public organizations, sports clubs and enterprises of Karelia.

The festival was opened by the Deputy Prime Minister of the Government of Karelia for Social Issues Larisa Podsadnik:

You have difficult trials ahead and a distance of about 5 km. “TRP Race” is not just a sports festival, it is a test of character. I am sure that all teams will cope with obstacles and show excellent time at the finish line. I wish all participants to show solidarity and teamwork! Good luck!

University of Tokyo: UTokyo and CNRS launch the CNRS-UTokyo…

Participants covered a distance of 4.5 kilometers and 10 obstacles: they rolled a wheel from a tractor, climbed over walls, crawled on the ground, ran uphill with partners on their backs, etc. It was very difficult!

The teams of PetrSU also decided to test themselves and their cohesion.

For the second year in a row we take part in the TRP race, because we like the atmosphere of this event, we like the emotions that we get while overcoming obstacles. At first it always seems that it is difficult and unrealistic, but when you start to run and feel the support of your comrades, it is very encouraging .

Another team from PetrSU called “ToadBoby” became the silver medalist of the competition.