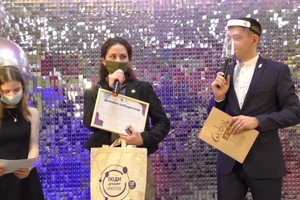 Summing up the results of the “Helping kindly” contest took place.
The competition for the presentation of the public sign of recognition “I help in a kind way” was organized by the KROMO “Center for the Development of Volunteerism” in the framework of the implementation of the instructions of the President of the Russian Federation No. Pr-38GS on the development of forms of non-material incentives for participants in volunteer initiatives. In 2020, the competition was held with the support of the Grant of the Head of the Republic of Karelia within the Dobro Digital project.

The significance of the competition lies in the recognition and encouragement of the socially active activity of the citizens of the Republic of Karelia who have been volunteering for a long period of time or have performed an important socially useful act for the local community.

In the nomination “For the development and implementation of socially significant initiatives in the local community, individually or as part of a volunteer association”, the winner’s diploma was received by the senior teacher of the Department of German and French languages ​​of the Institute of Foreign Languages ​​of PetrSU Yakovleva Ekaterina Anatolyevna.

For more than 15 years, Ekaterina Anatolyevna has been a volunteer at the Museum of Victims of Fascism, which operates under the Board of Trustees of the Karelian Regional Organization of Former Juvenile Prisoners of German Concentration Camps (KROOMU). In 2020, Ekaterina Anatolyevna won a municipal grant, at the expense of which work was carried out to collect the memories of concentration camp prisoners, the result was the publication of a collection of memoirs. Students of the Institute of Foreign Languages ​​of PetrSU took part in collecting memories. The educational project dedicated to the 75th anniversary of the Great Victory was created with the aim of spreading historical knowledge, educating society in the spirit of patriotism and civic consciousness, and developing the Museum of Victims of Fascism named after M. Kolbe.

PetrSU students and staff are winners of the “U Prize”

BLS International signs contract with Embassy of Brazil in China