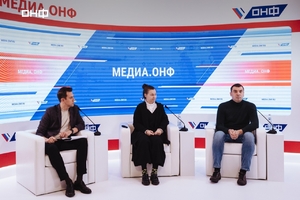 PetrSU took part in preparations for the ONF Media Forum

PetrSU students and staff prepared a video report for the ONF Media Forum, dedicated to identifying the most pressing social problems, the solution of which is planned to be discussed with the President of Russia V.V. Putin.
The ONF media forum is a platform for experts from the Popular Front and representatives of the media environment to discuss the problems and processes in the regions of Russia and the challenges facing the country. The issues and proposals raised at the Media Forum form the basis of the President’s instructions.

In 2020, students of the country’s leading universities were invited to prepare the forum along with professional journalists. The PetrSU team consisted of students of the Institute of Philology and media volunteers . The team was mentored by Anna Skoropadskaya, Associate Professor of the Department of Classical Philology, Russian Literature and Journalism , and Evgeny Mudretsov, the leading videographer of the Media Center .

University of Glasgow: No Increased Risk Of Dementia In…

For the Media Forum, the team prepared a reportage called “A Teacher Wanted”. The lack of teaching staff is one of the hot topics of direct lines with the President of Russia in the past. It directly concerns many students and graduates of our university, causes a great public response in Karelia. The video reflects not only positive changes and examples of resolved issues, but also problems that have not yet been resolved.

According to the results of the competitive selection, the report of the PetrSU team was included in the list of the best works. It is posted on the official website of the ONF Media Forum, and the team members were awarded gifts and letters of thanks from the head of the Executive Committee of the All-Russian Popular Front.

PetrSU is the winner of Hyperborea 2021

University of Glasgow: No Increased Risk Of Dementia In Veterans

University of Glasgow: No Increased Risk Of Dementia In Veterans

iednewsdesk Jun 25, 2021
The number of Scottish veterans who develop dementia in later life is no greater than in the wider community,…

University of Warwick: Ban all unhealthy food advertisements to tackle…

Tokyo Institute of Technology: One “Ring” to Rule Them…