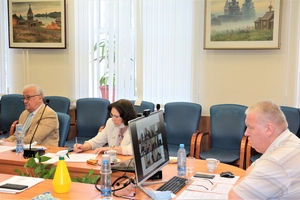 Council members who took part in the meeting from the side of Petrozavodsk State University – rector A.V. Voronin, vice-rector for educational and social work V.K. Katarov, Head of the Department for Innovative and Production Activities O.Yu. Derbeneva, Head of the Representative Office of the Innovation Promotion Fund in the Republic of Karelia A.S. Shtykov, director of the Medical Institute A.T. Balashov, director of the Institute of Pedagogy and Psychology R.E. Ermolenko, advisor to the rector’s office V.A. Shlyamin.

One of the issues discussed during the council is “On the participation of the Republic of Karelia in the implementation of the Strategic Academic Leadership Program (PSAL)” Priority 2030 “.

Recall that the Priority 2030 program is aimed at forming a wide group of universities that will become leaders in creating new scientific knowledge, technologies and developments for implementation in the Russian economy and social sphere. ( About the “Priority 2030” program ).

PetrSU Rector A.V. Voronin made a presentation on the priority scientific, educational and scientific and technological areas of PSAL PetrSU.

Petrozavodsk University is actively developing a development program and is going to participate in the competition of the Strategic Academic Leadership Program “Priority 2030”. Our university, together with partners, creates a consortium, which will allow us to jointly ensure the implementation of priority educational, scientific and innovative projects. I am sure that the Priority 2030 program is a huge leap forward in the development of higher education and science in our country in the formation of new scientific knowledge and training for the regions,

Following the meeting, the council members made a decision to approve and support the participation of Petrozavodsk State University in the Priority 2030 Strategic Academic Leadership Program.

The council includes the chairman (A.O. Parfenchikov), deputy chairpersons (L.A. Podsadnik, R.G. Golubev), executive secretary (N.V. Karmazina) and members of the council. The composition of the council was approved by the Head of the Republic of Karelia. The council includes representatives of ministries, departments, enterprises and organizations, educational institutions of higher education and science of the Republic of Karelia.

The main tasks of the council:

Diplomas were awarded at the Institute of Economics and Law