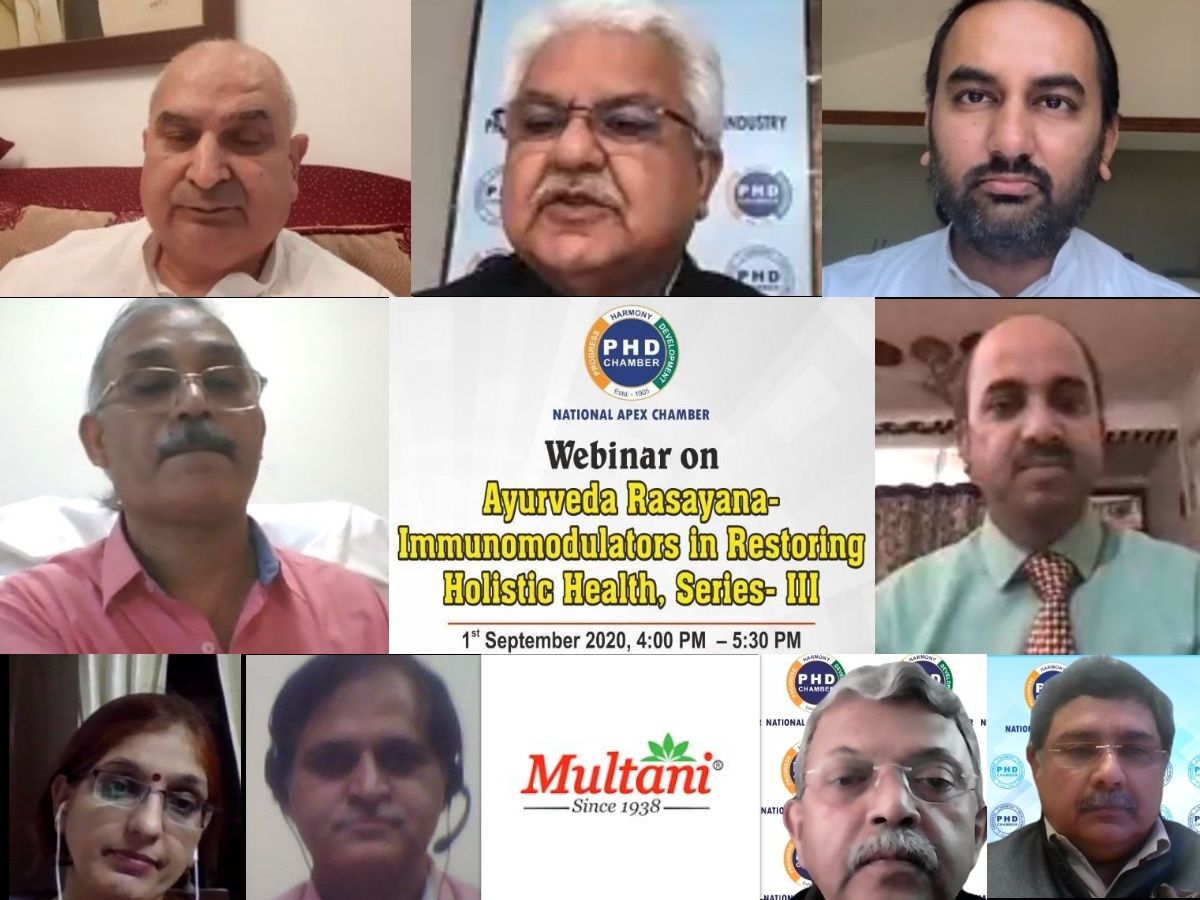 Padma Bhushan & Padma Shree Awardee Vd. Devendra Triguna, President of AMAM, All India Ayurvedic Congress and Ayurveda Mahasammelan mentioned about the benefits of Immunomodulators and said that these Rasayanas should be consumed at least for 2-3 years at a stretch to build a long lasting immunity. He recommended that AYUSH KWATH KADHA, immunity booster should be distributed in all the containment zones to help people build their immunity by the State Governments. He added that Nature has built the human body in a manner that it can have nirogya kaya (healthy life without diseases) for 100 years and Ayurveda can be instrumental for the same.

Mr. Pradeep Multani, Vice President, PHD Chamber in his Presidential address deliberated about the importance of Ayurveda Rasayana-Immunomodulators and the role they play in the long-term boosting of the immunity of the human body.

Mr. Multani discussed about the benefits of Brahm Rasayan and how it helps physical, mental, and other senses leading to overall development & improvement of the human body. He mentioned that many of the herbs were found to act as Immunomodulators as per Ayurveda. This shows that they act as anti-oxidant, anti-stress, anti-inflammatory and anti-bacterial and helps in building immunity against diseases. The ingredients of Brahm Rasayan are the herbs that have been found to exhibit Immunomodulators effect in formulations.

He stressed that during these challenging times, where there’s no cure been found for the virus, It’s pivotal to wear masks, use sanitizers, practice social distancing, and boost our immunity. Ayurvedic Siddha yoga and homeopathy are playing an important role in building the immunity of our population. Herbs like giloy, ghanavati, Ayush kwath, chayanprash are playing a major role in immunity building.

Mr. Arvind Varchaswi, Chairman, AYUSH Committee, PHD Chamber highlighted that Ayurveda can treat physical as well as mental health issues. It has been called another system of medicine and, it’s reviving its importance in today’s world. He mentioned that Ayurveda is customized according to one’s body and has a long-lasting effect on the body. He added that there is a lot to be done for Immunomodulators in terms quality of manufacturing and getting the industry to come together to amplify its practice. He also stressed on the practice of yoga and meditation in day to day life for living a healthy life.

Dr. P. K. Prajapati, Professor & HOD, Dept of RSBK, All India Institute of Ayurveda in his remarks emphasized about maintaining a balanced lifestyle during the Covid period and talked about the combinations & formulations of herbal drugs which are available in the market which can be used to build immunity e.g. Kwath, Shilajeet etc. He also mentioned that guduchi, Ashwgandh and other herbs have helped people in building their immunity during these days. He also urged the AYUSH Industry to enhance quality standards of products.

Dr. Raghuram Ayyagari, Chief Medical Officer (Ay) NFSG, Directorate of AYUSH, Govt.of NCT of Delhi gave a presentation in which he mentioned about how to restore a holistic health with the help of these Rasyanas. Dr. Raghuram also mentioned about importance of Chyavanprash, Guduchi, Ghee, AYUSH Kadha etc could also play an important role in building overall immunity of an individual.

Mr. Saurabh Sanyal, Secretary-General, PHD Chamber delivered a formal vote of thanks to all the delegates and participants and expressed his condolences on the passing away of Shri Pranab Mukherjee, Former President of India. Mr. Sanyal also thanked all the esteemed panelists and mentioned about the continuous efforts being made by PHD Chamber’s AYUSH Committee.

The session was moderated by Mr. Vivek Seigell, Principal Director, PHD Chamber and requested the industry to come forward and spread the message of better health through AYUSH systems. He also talked about that how the Arogya Fairs which had been organised by the Chamber in various locations had higher numbers of OPDs that the biggest civil hospital in that city which proved the fact that given the information and awareness to the general public, the AYUSH system can draw much more acceptance and awareness.

The webinar was sponsored by Multani Pharmaceuticals Pvt. Ltd. and was attended by approximately 150 attendees.

iednewsdesk Jul 29, 2021
The University of North Carolina at Chapel Hill will innovate and advance artificial intelligence to improve…

Georgia Institute of Technology: Toward Accessibility and Inclusion:…