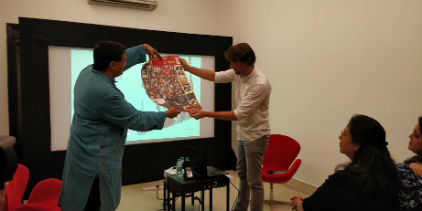 New Delhi: Serendipity Arts Foundation, partnering with PIX Publishing and Mapin Publishing, launched a photo book “Photo Peshawar” at Serendipity Arts Foundation on 24th March 2018 . The book by Irish ethnographer Sean Foley and Austrian photographer and artist and filmmaker Lukas Birk portrays the culture of photography in the Pakistani frontier city of Peshawar from the late 1940s to the present day.

“Photo Peshawar’ looks directly at the practicing photographers, the various kinds of craftsmen that have sprung up to define self-representation over generations of Peshawaris. A particular focus of this book is on photographers who work in two areas of Peshawar: Saddar Road, the relatively genteel and elite new city area, and Cinema Road, representing a more chowk-like energetic old city culture. There are also references to smaller enclaves which house studios such as those around Randaz Bazaar, close to the ‘ladies’ market’ – which as the name implies, sells woman’s cosmetics, jewellery and fabrics – and Sikandar Pura. It also looks at women in photography.

The book explores the rich and largely unexplored photographic tradition of Peshawar, variously borne of British rule, the Partition of India, war in neighbouring Afghanistan, the rise of the Taliban, local tribal law, an historical prohibition on image-making in Islam, the practice of purdah (the veiling of females in public), and the regional movie industry.

Speaking on the occasion, Smriti Rajgarhia, Director Serendipity Arts Foundation said: “We are delighted to release “Photo Peshawar”, a compelling book which will enrich our understanding of its human subjects and their culture. Photography in Peshawar has historically and culturally found itself wedged between the multi-denominational Indian sub-continent and predominantly Muslim Afghanistan; and artistically it is caught between the creative and conservative forces of both. Sean Foley and Lukas Birk have created a lovely volume which inspired us. Serendipity Arts Foundation has always supported and promoted exceptional artists and we are happy to share this beautiful book with the world.”